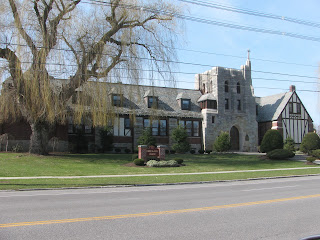 Today I went with my mom to Mass at Christ the King. That is the parish in Snyder where I grew up.

Hahahaa! Here is a sign I found on the Internet on signspotting.com. I do not think it is our Christ the King but it is still funny. 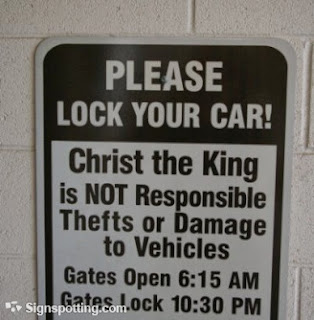 It was my first experience with the new liturgy! When the priest says, "May the Lord be with you," instead of saying "And also with you," you say, "And with your spirit."

I have missed out on all the liturgy excitement so far because I normally go to the Tridentine Mass in Latin at St. Anthony's. But there is a first time for everything! And this was my first time with the new liturgy.

Here is what was funny. I get there and I am kind of excited about all this. And the priest says: "The Lord be with you."

After all that anticipation!!

Luckily everyone around me was competent and enthusiastically replied: "And with your spirit."

You had to hand it to this congregation. The church was packed, and I mean packed, every pew, with people standing in the aisles. And Christ the King is a big church. And this was 12:15 p.m. Mass. Granted it was New Year's Day and most people had probably been up late, hence the popularity of this late Mass. But on the other hand, this was New Year's Day when you would not think people would feel like going to church. And here they were!

And they were clearly into the new liturgy. Enjoying it. Not only that, but everyone, guys and girls, singing all the hymns. Everyone was attentive and involved. Not in the sense of up out of their pews and running around, just engaged. You could tell. I admire this church, I have to say that.

My mom was also singing along competently unlike me. I lost my voice on New Year's Eve. As Stan Laurel used to say, "I used to have a nice voice, until I ran a nail through it." Hahaa! Leonard Pennario would get a kick out of that line, being a Laurel and Hardy fan.

I got worried about my mom for a while because she kept looking down and hunching over and she looked preoccupied.

She said: "I lost an earring."

We found it at communion time. The people in the pew behind us whom we knew helped us find it. Not to blame my mother but stuff like this always happens to me at modern Masses, you know? I am just not able to concentrate the same way.

That and the priest had to stop Mass and make a speech about how nice it was that young people were singing in the choir, and then everyone had to applaud. What in the world, you know?

Final gripe, I had to receive Communion in the hand, an indignity that has not been visited upon me for four years now. And from a Eucharistic minister, another thing I have managed to avoid for the same length of time. I just could not get into the priest's line. It would have taken a lot of doing and sometimes, as my new friend Kenny sings, you got to know when to fold 'em.

That is not exactly starting the New Year off right in my book.

But still. I survived.

And my mom found her earring.

And I am getting my voice back.

LOL I just happened to stumble across your blog having googled "Chapel Veils" and you know what's funny- my family was at this same Mass! I had the little black cap style and one of my girls was wearing a snood and the other a Christmas hat.

Diva, are you still out there? It is months later but I just saw this comment and I am laughing about you being at Christ the King when I was. I love that you wore a black cap style veil. Maybe next time I wind up at CTK I can work up the courage! Anyway, belated thanks for the nice comment! Glad to "meet" you too.