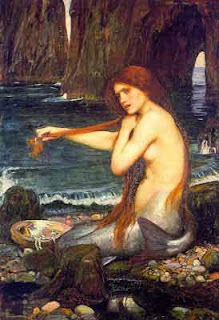 So tonight I was at my mom's and my little niece and nephew were there and by popular demand we returned to "The Pobble Who Had No Toes."

It is passing into common knowledge. For instance when 3-year-old  nephew George Andrew cut his finger he said he would be like the Pobble Who Had No Toes, only with him it would be fingers. Ha, ha! I said, Georgie, I hope not!

Anyway Barbara and Georgie are there next to me and we revisit "The Pobble Who Had No Toes." I am getting to love the poem too. I love how Victorian it is. How they put the Pobble in a friendly Bark ... I always have to stop and explain a bark is a boat ... and then they row and row and row till they come to his Aunt Jobiska's Park. In 1848 when this book was published you would have a park.

There is also the speculation about how the Pobble loses his toes. Edward Lear raises the possibility of a mermaid.

And I began to explain: A mermaid is half fish, she has the tail of a fish, but the other half is, she is a beautiful girl, and --

And I felt chastised. I mean, I probably would have gotten around to telling her mermaids were make-believe,  I like to think I would, but for a second, could we not enter the world of Edward Lear, and the mermaid, and Aunt Jobiska's Park?

I will have to try to sneak Edward Lear words into my book about Leonard Pennario. Words like "runcible," "flannel" and, well, perhaps I will allude to my Park.

Then again, the story is unbelievable enough on its own.
Posted by Mary Kunz Goldman on January 02, 2012