I love you, Buffalo 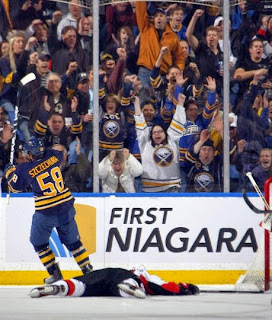 This picture is the spirit of Buffalo as far as I am concerned. It comes from the Buffalo Sabres Web site. I found it posted on the wall of my friend Jennifer, author of the popular and pioneering Web log All Things Jennifer.

It is a classic!

You have the Buffalo Sabres battling the enemy, one of the enemy players down and everyone screaming. Jennifer is the gal in the front cheering with her arms in the air. Next to hear is her fiance who has the Buffalo name of Weber. Jennifer has that in common with Mozart, both of them married people named Weber. Well, Jennifer has not married her Weber yet but she is about to.

So they are there in the front. Also check out that person on the other side of Jennifer, hammering against the glass! And all around people are screaming and yelling and carrying on.

That is Buffalo! I used to laugh with Leonard Pennario about that, that there is no place on earth like our hometown. Stuff here you could not make up.

Another Buffalo thing: that story about the hit and run in the parking garage downtown.

We can go ahead and laugh about it because nobody died and the people who were hurt were treated and released. The suspect in the case is named Booze. The guy he allegedly hit is named Beers. And not only that but as my mother points out, it all happened in the Augspurger Ramp. That is a great name that conjures up visions of beer steins, Oktoberfest and the St. Pauli Girl.

As Howard said it all sounds like The Onion.

A great note on which to begin the New Year.
Posted by Mary Kunz Goldman on December 31, 2011

Email ThisBlogThis!Share to TwitterShare to FacebookShare to Pinterest
Labels: Buffalo