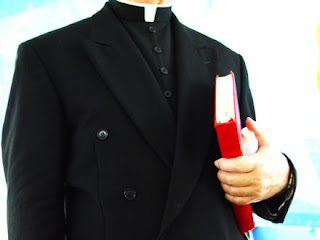 Yesterday I went to church in the morning and afterwards I was in the vestibule gabbing with a friend. And while we were talking this cool-looking guy came in to go to the Italian Mass. The Italian Mass is after the Latin Mass. And he waved to me.

I waved back but I said to my friend, "Who is he?"

The guy looked like someone I had seen only I could not think who.

Then I realized who he was. He was the Italian guy from the other night whom I had said ...

Ha, ha! This would not happen if I were single, I will tell you that right now.

Meanwhile the padre and I were laughing about our Friday night at the Hyatt.

I guess he and his friends really made the scene, going to the Statler too, and to the Convention Center.

Me, working on the book about Leonard Pennario has clipped my wings somewhat. I could not go out until later! I have to ask the padre if he heard Howard playing the piano at the Statler, because Howard was playing that night.

When Padre Secondo came into the Statler he said hello to Howard first thing, even before saying hello to Jocko. Howard was bragging about that.

"Everyone must have thought I was really important," he said.

Howard liked meeting the padre. "He wasn't the way I had pictured him," he said.

"How had you pictured him?" I asked. 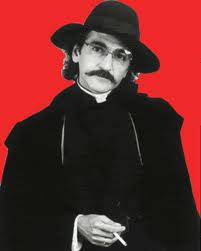 I really did not know who Father Guido Sarducci was. I thought he might have been on "Saturday Night Live" and sure enough he was.

"He was this hipster," Howard said.

Howard was educated by the Vincentian Fathers but sometimes he has a hilarious conception of the Catholic Church.

Imagine, all these past four years here I have been going to St. Anthony's and talking about the Tridentine Mass there and Howard has been picturing Father Guido Sarducci.

Whenever I mentioned Padre Secondo saying this or that, Howard would imagine Father Guido Sarducci saying it.

You never know what people are thinking!
Posted by Mary Kunz Goldman on December 05, 2011