A visit from St. Nick 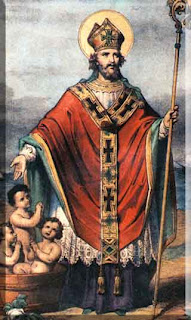 The other day in The Buffalo News we published this essay by a kid who has begun celebrating St. Nicholas Day. This was funny, at the end of the essay she was writing that St. Nicholas reminded her of Santa Claus. Both of them show up in the night and leave you presents, etc.

Um, honey, St. Nicholas and Santa Claus are, like, the same person?

No one had ever explained that to her!

I am not blaming her. I am honestly just floored sometimes by the things that are not -- how do you say it -- universally understood. Everyone should understand that Santa Claus is St. Nicholas, you know? As in "A Visit From St. Nicholas."

Just like everyone should know that Leonard Pennario was America's greatest pianist. Well, educating people on that is up to me.

Here is a bit of trivia I bet you did not know about "A Visit From St. Nicholas," the famous poem that begins "'Twas the night before Christmas" and goes back to, yikes, 1823. Can you believe it is that old? It is holding up rather well.

But that is not the trivia I was talking about.

Here is what I love: The poem was written by Clement Moore who was a professor at Columbia University. He was friends with Lorenzo da Ponte, who collaborated with Mozart on "Don Giovanni," "The Marriage of Figaro" and "Cosi fan Tutte."

Should your day need jump starting the way mine does, take two minutes to hear the famous Champagne Aria from "Don Giovanni" sung by my favorite singer, Dietrich Fischer-Dieskau.

Hahahahaa! Is that marvelous or what?

Lorenzo da Ponte was born in the Jewish ghetto of Venice but came to America after Mozart died. That is where he met Clement Moore and my understanding is that the two poets hit it off.

I like playing this "six degrees of separation game." Who knew who.

Probably if we could go back far enough we would only be six degrees away from St. Nicholas.

And maybe Santa Claus too.
Posted by Mary Kunz Goldman on December 06, 2011