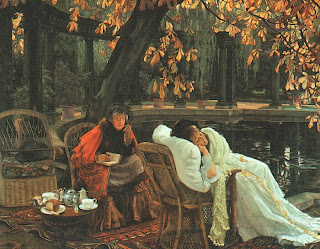 Today I am feeling much better. I am kicking my cold! But I am still, as we say, convalescing. I did convalescent things. Isn't that a great picture up above? I found it on the Internet. It is called "A Convalescent."

I went walking in Delaware Park today with a friend from work who was kind enough to call me up. I wrapped myself up warmly.

A couple visiting the bison exhibit asked that we take their picture which we did. Tourists! They are everywhere!

Back home I did cooking chores and worked on my Leonard Pennario book which is coming together fast now. It is like a jigsaw puzzle, you get enough pieces and then it all starts coming into focus. That is the way I am thinking anyway! Watch, it will be five years from now and I will be writing the same thing.

Also while I was on the phone I made vanilla extract. You take two vanilla beans which somehow I had ended up with after my scrambled evening Christmas shopping last week. You cover the vanilla beans with vodka. Voila!

The only trouble with the vanilla extract is now it sits in a cupboard undisturbed for a month. I do not like things that sit for a month without my doing anything to them. It is just how I am.

Maybe I can at least shake the jar daily.

Anyway. So there was that. After I worked on my book for longer than I thought was healthy I did a little Web surfing. I read up on the Republican candidate Rick Santorum. I like that Rick Santorum goes to the Latin mass and I do too. I mean, a candidate who goes to Latin Mass, what are the odds?

If I ever meet him I will say, "Dominus tecum, Rick."

And he will say benevolently: 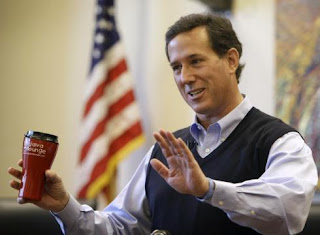 Ha, ha! That was fun. What else did I do? I made a pot of lentil soup.

I made a pot of chili.

I think tomorrow I will be totally back to normal.
Posted by Mary Kunz Goldman on December 30, 2011