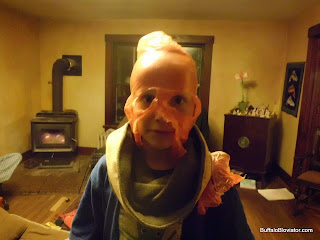 Howard took this picture on Christmas night of our nephew George Henry. Howard calls him Hank.

George Henry, or Hank, likes to have fun with the orange plastic bags that The Buffalo News arrives wrapped in. He pulls the bag over his head and then rips it for maximum alien effect.

This is another thing about George Henry: One winter day my sister got a call from his school. He had hurt his tongue, they told her.

Then they said, "Do you want to know how he did it?"

Steeling herself she said yes.

What had happened was, he had licked the outside of the school bus. It was cold and his tongue had stuck to it.

Hahahahaaa! We should not be laughing probably in this politically correct day and age but laugh we did, last night. George Henry joined in the laughter. And his uncle Joey said to him, "You learned your lesson, right? So if you see another school bus, you will be ready, and you won't lick it."

George Henry is endlessly amusing. As Howard says he is right out of Mad magazine. It will be pity when he grows up!

Remember when he and I went sledding? That was three Christmases ago, ye gods.

Ye gods how long this book on Leonard Pennario is taking.

Howard took this picture of me in my pajamas under the tree. 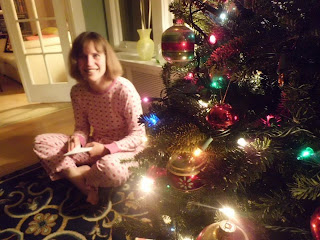 Howard gave me the funniest present. It is a Mood Alarm Clock! You set it and it turns different colors during the night to alter your mood and your dreams. The directions are written by someone who does not quite know English so this will be an adventure.

"Living in a fast-paced society brings a lot of pressure and stress to people," the directions begin, bravely. "How to soothe and relieve these problems has been an important project to researchers and scientists for years. They have discovered that light and color change can bring a significant improvement on these problems. Our cutting-edge product MoodiCare clock is made based on that idea The special features are, it can soothe and relieve your pressure and stress which are caused by many other factors such as work."

I have tried to keep the punctuation and capitalization the same. When I was reading it out loud I had to stop at the point I just left off because I was laughing too hard.

And so to bed.

I am going to test out this clock!
Posted by Mary Kunz Goldman on December 25, 2011