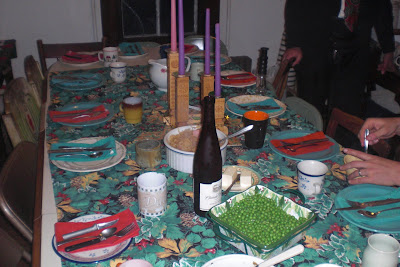 Here is a picture of our Christmas table at my sister's house set by our girls, Rosie and Millie. They are creative as we learned the other night when they baked cookies at my house.

My sister Katie and my brother-in-law David live in East Aurora. Note to out-of-towners: That is an idyllic little town south of Buffalo. It is where Fisher-Price toys are made although Fisher-Price is now owned by Mattel and Mattel is owned by whoever. I was just on their Web site trying to figure it out and I gave up.

Jimmy was a chicken they had raised. He was as big as a turkey by the time he went to his reward!

My sister Katie's family raises chickens all the time and you would think that would be a problem for the girls, eating them, but no, it is not. Once a few years ago I remember Rosie holding their chicken Primrose and petting him and showing him off to me and the next week guess what? There was Primrose on the dinner table and nobody seemed to care.

What about William Primrose? He was considered by many to be the world's greatest violist. Leonard Pennario had funny stories about playing with him. Here is a famous picture of Pennario with Primrose, the violinist Jascha Heifetz and the great cellist Gregor Piatigorsky. Primrose is on the left and Pennario is on the right. I like that smile on Pennario's face. You can tell that in his head he is working on his imitations of the other three.


Lastnight after dinner when it was dark we went out on the hill and went sledding. I was glad Rosie dragged me out there because it saved me from the pumpkin pie. I had made the pumpkin pie and it had taken me two hours so I knew how good it was! Sledding is like magic because it is as if you are 12 again. You cannot even let yourself think. The first time I was at the top of this big icy hill I am thinking: What have I gotten myself into? But my nephew George Henry was all ready to go down the hill with me on this sled. He is 5 so he is fearless. He got into it with me and then he said: "Go!"

All I saw ahead was darkness. I said: "George Henry, there isn't anything out there, is there, that we could plow into and that could hurt us?"

"There are just these trees," he said. "We'll miss them."

That is the attitude that landed me in California last winter with this concert pianist I had only just met! Come to think of it I had a couple of conversations with Pennario before I left Buffalo that were a lot like the one I had lastnight with George Henry.

The funny thing on the sledding slope was that the adults outlasted the kids. The kids were all tired and hurt after about an hour but we were still hurtling down the hill. Howard came out after a while and we went hurtling down together. That was fun because Howard began yelling, "Holy ----!" Then he ejected from the sled and left me to go it alone. Later he explained he had been trying to stop us because he thought we were heading into bushes.

Which we were. There are bushes at the bottom of this hill and the trick is, as Rosie told me, you cover your eyes as you fly through them. That is what I did.

The best ride I took was with my brother Tony. We went flying down the hill and we were both having a good time so neither of us slowed down the sled. It went faster and faster and it zoomed through the bushes and plowed through the weeds where I got a mouthful of weeds and ice down my back but so what, we were still moving, and gathering speed. The sled then flew up the embankment and over the railroad tracks and went airborne, like in Calvin & Hobbes. Then it continued onto the other side and hurtled into these thorn bushes where it finally came to a stop.

So there I am in these thorn bushes and one of my boots, borrowed from my sister, has come off so I am in the snow in my socks. And I am laughing and gloating: "It doesn't get better than this! This is the best!"

You have to wonder what your life is coming to when that happens.

Howard and David were at the bottom of the hill when Tony and I flew past on that sled and Howard said we were doing at least 40. That is something to be proud of.

Remember those huge wooden toboggan chutes at Chestnut Ridge Park? Howard and I were talking about that on the way home. 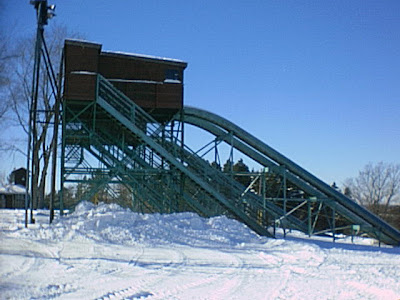 My brother George says they do not use them any more and it is a miracle they are still there. Howard said they were like the Giant Coaster at Crystal Beach. But when we were kids, that was something, the scene at Chestnut Ridge. The adults would be in the lodge with the big fireplaces and booze would be flowing and people would get those toboggans going like crazy, just hurling them down the hill. The view from that hill! And we kids on sleds would have to get out of their way.

And as young adults we would go there on our own. The toboggan would come down from the rafters of someone's garage and we would go tobogganing until someone broke a wrist or an arm. Trips to the emergency room were common. But back then things were different. Nobody sued. Now, Cellino and Barnes would set up a field office at the bottom of the hill! But back then nobody worried about anything. The rest of us would continue tobogganing and later we would go and visit the victim.

Wow, that was fun!

Wow! Those pics of the tobaggan chutes brought back some memories- I had no idea they were still there! As kids we used to ski there as well, in those old-fashioned heavy leather ski boots that always ended up cold & wet... :-)