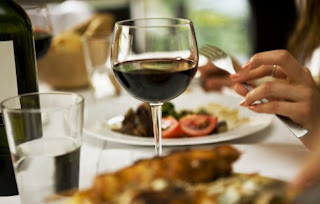 Howard and I celebrated our anniversary today! It has been seven years since Father Butch married us at St. Gerard's Church.

Howard and I met at Fanny's and this year was traumatic because Fanny's not only closed, but the building was torn down. If you go down Sheridan in Amherst you will not even be able to see where it was. It is now a medical building or something.

We used to go to Fanny's to celebrate our anniversary but now it is as if we have been orphaned. What to do? What to do?

We thought of doing something new, going for sushi. But we do that anyway, once in a while at least.

Then we thought of Oliver's.

It is practically right down the street and we love it, the dark inside, the circular booths. We sat in one of the booths near the bar and enjoyed the ambience. I chose the Cornish hen because that is my job at the upcoming office cooking club, to make Cornish hens, and I wanted to see how the masters do it. Just like, if you are learning the Liszt Sonata, you want to hear Pennario play it.

The bad news was, I ate and ate and there was no stopping me. Well, finally I had some of that hen wrapped up to go. This was one of those dinners I just love remembering. Cutting-edge foodies would probably not think it interesting, but it was just good, you know? This perfectly roasted hen and mashed potatoes and I think spinach. So yummy. The mashed potatoes, mmmm.

I left really feeling I had been fed.

Howard got lobster tail. Afterward we hung around and gabbed with Mike, the bartender, who remembered the Round Table which is now Big Blue. Mike was little at the time that the Round Table was still opened but his dad had been one of the owners. As I understand it. At the time I was thinking more about my dinner than anything else.

One other nice thing, as usual I was scrambling around at the last minute trying to figure out what to wear. I tried one thing and did not like it. Tried another outfit. Not quite right. And I was all mad at myself. God forbid I plan in advance, you know? God forbid I have a plan.

Then I found this one red dress I had forgotten I had. No way, I thought, this will not fit me. Or it will not look right. But ... I stepped into it, I zipped it up. It did fit! Not only that but it felt good. And it looked right! Well, I thought it did, which was good enough for me.

It is funny how when you find the right thing to wear, that makes your evening. Nothing could go wrong because this red dress had turned up out of the ether.

I hope next year I am as lucky!
Posted by Mary Kunz Goldman on December 12, 2011