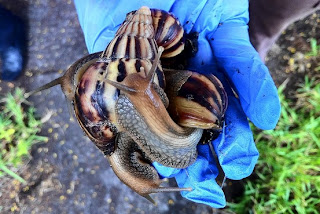 Miami is beset by giant snails! There is a story about it in the Wall Street Journal and above is the Journal's picture of one of them. They can grow to be eight inches long!
These are not picturesque and exotic and thrilling creatures like the Great Pink Sea Snail in "Dr. Doolittle." 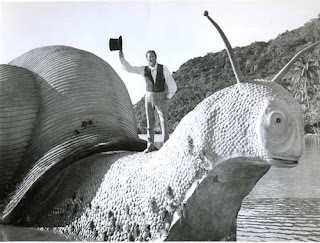 They are huge slimy revolting creatures! There is this one sentence in the Journal which I have to quote in case you cannot access the story. Ahem.
"The snails' engorged bodies extend far from their shells, and they eat so ravenously that they leave trails of excrement on the walls and the ground."
The Journal reported that one woman went out of her house and saw one of these snails and immediately got a migraine and had to lie down! 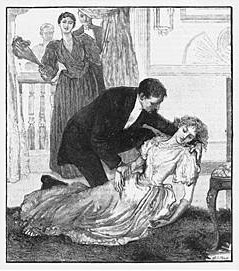 That is how you tell it did not happen in Buffalo. Had it happened in Buffalo we would have written that she had to "lay down." Buffalo just cannot get that right! But do not get me started on that. I do not know how Leonard Pennario wound up with his impeccable grammar, growing up here.
But anyway.
One very problematic thing about these snails, they can reproduce themselves. They do not need another snail! So there are eradication teams now going from house to house. As the story says, they just remove and remove and remove. Because if you leave any one of these snails alone with itself for any length of time it will lay a million eggs.
There was one investation in 1964 when a kid brought three home from Hawaii and kept them in a terrarium and his grandmother eventually let them loose in the backyard. That infestation took 10 years to subdue!
Just one more reason why I am glad I live in Buffalo.
Buffalonians might not know "lie" from "lay" but at least we do not have to deal with tropical pests!
Posted by Mary Kunz Goldman on October 04, 2011