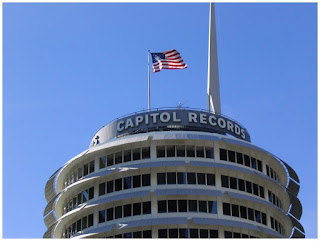 Yikes, I fell behind over the weekend and am going to have to do some catch-up again. The last two weeks have been mayhem with the book and with work but the next couple weeks should be more on an even keel.

One thing I did recently was call Capitol Records. They have some of Leonard Pennario's recordings still in the vaults and I wanted to inquire about them. I am at the point as I craft my, ahem, masterpiece when I am working on tying up a lot of loose ends.
It was funny because this guy I reached, it sounded as if he was not used to getting phone calls. He answered in a way that made you think he was hiding something. That is the way you behave when you are answering the phone in a vault! Once I worked in Manufacturers and Traders Trust's Safe Deposit Vault and that is the way I answered the phone too.
Hahaha! I was a temp when I worked at M&T and they put me in that powerful position. On my first day they were training me on how to answer the phone, what to say, what to do, in the remote chance that it rang. They are carrying on in utmost seriousness and in the middle of the training, to my shock, the phone rang! This phone, deep in the vaults, in the middle of nowhere.
"Go ahead. Answer it," the suit who is training me says.
She and the other woman fall silent, waiting to see what I say, how I deal with it.
So I pick up the phone. "M&T Safe Deposit Vault," I say.
And all I hear is this laughing.
It was my brother George!
Hahahaha! George and I had a joke back then about tracking each other down no matter where we were. And this was before cell phones, when it was challenging. Well, the woman training me at M&T was not amused.
But back to the guy in the Capitol vaults. I pictured him in some windowless office somewhere. Just him and one of those old black phones.
I explained who I was and what I was up to and he listened in silence.
Then he said, "Don't hold your breath."
Haaahhhaaa!!
That has to go in the book!
Later I realized I had emailed this guy about a year ago and he had never replied. That is OK. I am glad I am not the only one who drops the ball on stuff. I am ready to go forward. In our phone conversation the other day, which was brief, he asked me to send him an email with recording dates and numbers and everything. Which I did, that same day.
Now I am following his instructions and not holding my breath.
Perhaps they are overworked there in the Capitol Records vaults. All I can think is, Pennario fans are clamoring constantly at the gates.
But I do think things will work out with Capitol, or EMI I should say, because they are part of EMI. They are still their own division though. That is nice. I have various ideas and questions I floated in my email and I do believe this book is a good project and something the world needs. Things work out with it. People who were lost turn up. Things I am looking for come my way. Pieces fall into place.
Remember the Divine Assistance? I think that I feel it.
And if you can say that on a Monday morning, it must be there!
Posted by Mary Kunz Goldman on October 03, 2011