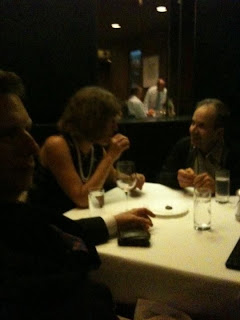 My piano teacher, Stephen Manes, is in town and last night we went to Oliver's. At first our plans were to go to Gabriel's Gate but then at the last minute Howard changed our course.

I called Stephen. "Stephen," I said. "Howard wants to take us to Oliver's and I do not think we should argue."

We did not! There we are up above, not arguing. That is me in the middle and Stephen on the right and Howard on the left. Howard keeps laughing about that picture and he got me laughing about it. He said, "I look like some guy on the way to the men's room."

Anyway, back when I was following an ignorant agenda I had no idea I would one day be friend with Stephen Manes.

I had no idea I would be knowing or writing about Leonard Pennario.

Or that I would have bagged this nice husband like Howard. How in the world did that happen?

Life sneaks up and surprises you!

Now to the big question, what did we eat. I am a herd animal and I followed Stephen. He ordered a seafood chowder and I did too. Then he ordered the heirloom tomato salad and I did too. No one will ever accuse Oliver's of giving you huge portions. You do not go home guilty! They do not stuff you like at E.B. Green's where you go home groaning.

It is like the musical "Oliver!" "Please, sir, can I have some more?"

Ha, ha! I could not resist that. But seriously I have to say, the food was delicious, and it went the distance. I did not go to bed hungry even though you know me, I am used to eating like an ox. Plus we loved the ambience. No one annoyed us. That is a rare thing to be able to say when you are out in a restaurant!

Howard got some lobster thingie. And I loved Stephen for siding with me in the argument of whether lobster tail was actually part of a lobster, or a different animal. For years Howard has tried to tell me it is from a different creature. Stephen said I am right and it is actual lobster. Yay me! I am right!

One more thing, they have half-price bottles of wine on Sundays at Oliver's, who knew? No wonder the dining room was crowded. This was funny, I asked the waiter if the crowd was because of the half-price wine. I liked how he did not go so far as to say yes, it was.

But over his shoulder he said, "It doesn't hurt."

That is for sure.

To your health!
Posted by Mary Kunz Goldman on September 19, 2011

Email ThisBlogThis!Share to TwitterShare to FacebookShare to Pinterest
Labels: Restaurants