Another one bites the dust

I am having a terrible time with priests.

It seems that so often whenever I run into one I especially like, something happens to him. I have this experience on a local and a not-local level.

On a not-local level I liked that celebrity priest Father John Corapi. I used to love his talks on Catholic Radio and they got me doing a lot of good things I might never be doing otherwise.

Then he went down in flames, spectacularly I must say, in a cloud of accusations of having a girlfriend and living with her, owning millions of dollars worth of boats and motorcycles, etc. As usual when you are dealing with the Catholic Church, the whole affair was shrouded in mystery and now it has faded to black and we will probably never hear how it comes out. But the long and short of it is, Father Corapi is gone.

On a local level there was a priest I especially admired who used to say the Latin Mass at Our Lady Help of Christians. His name was Father Bialkowski. I did not know him personally but I used to love his sermons and how he said the Mass and he always struck me as a very good man.

Remember, when I had that Mass said for Leonard Pennario, Father Bialkowski was the one who said it. I even mentioned him.

Then well, he was taken away. Because of a haze of accusations which, they seemed fishy to me, but what do I know. And what does it matter. The long and short of it is, Father Bialkowski is gone.

Now today I pick up the paper and I am warming up my computer and what do I see on the front page of The Buffalo News, albeit small and down in the corner, but there was this new priest at Corpus Christi I liked. Well, he was new last year. I mentioned meeting him on that wild Dyngus Day. Ha, ha! That is still one of my favorite posts. This picture ... 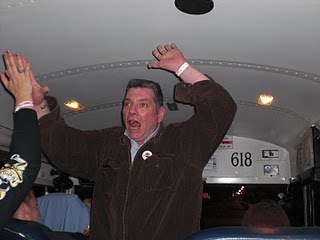 ... I should win a Pulitzer for it. Note: That is NOT a priest, at least not to my knowledge. That was just a reveler on the bus.

But anyway. The priest's name was Father Matthew Wydmanski. A few months ago on Ascension Thursday I went to Mass at Corpus Christi and I was struck by the beauty of the Mass and how reverent he was. It was not quite a Latin Mass but it was close. Anyway, I liked this priest, Father Wydmanski, and I remember thinking how much good he was doing on Buffalo's East Side.

Today I read he got arrested for DWI and now he has fled back home to Poland.

That is just dandy, you know?

I had talked to him after Mass on Ascension and I was looking forward to seeing him again this weekend when I go judge pierogies at Corpus Christi. This is a bummer!

I mean, it is better than if he were stuck in the situation Father Bialkowski is in, but still.

The long and short of it is, Father Wydmanski is gone.

Not to sound like my great-grandmother, who according to my mother used to sit perpetually in the corner of the kitchen, praying the Rosary in German. But stuff  like this has to make you wonder if the devil is at work.

I believe the devil exists, I will tell you that right now, and I think he finds ways to rid us of the people who do the most good. Maybe it's this, maybe it's that, maybe they did what they are accused of, maybe they were accused falsely, it all comes out the same. The main thing is, these guys are gone.

Remember the creepy story about how the devil made a phone call?

If he can make a phone call he can do this.

In a weird coincidence not only will The Buffalo News' Web site not give me the story about Father Wydmanski to link to -- but the world "devil" is in the banger headline.

You got to wonder!

What is a banger headine? That's a new one on me!

Persnickity, the banger is the main story on the front page, the story that anchors, or carries, the page. Don't you love newspaper lingo? I have fun slinging it around.