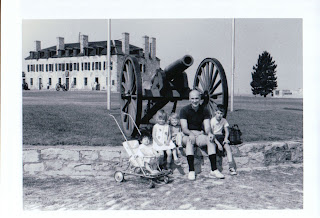 My sister Margie posts old family pictures on Facebook. That is us up above at Fort Niagara. I am second from left, as if you could not tell. My brother George was not born yet!

Notice how my dad has us all under control. Also, I love his mailman socks.

George came along in 1969. Here he is with Margie. 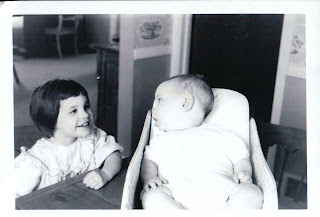 Ha, ha! As I wrote on Facebook, George still has that look.

Here is Margie riding the fishies at Crystal Beach. 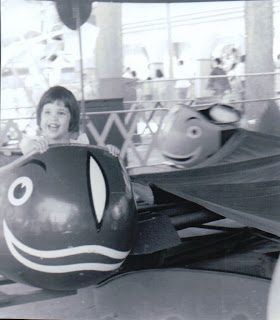 It is funny that no one in Buffalo can get over the loss of Crystal Beach. Margie founded a Facebook group dedicated to it and people are just pouring in. Crystal Beach was not even in Buffalo -- it was across the river in Fort Erie, Canada -- but it was ours, and we loved it.

When I first talked with Leonard Pennario it took him maybe three sentences to bring up Crystal Beach. I may not have known his thoughts on Anton Rubinstein's piano concertos but I know what his favorite rides were at Crystal Beach. And he knew mine. Hey, what can I say, we had our priorities.

One more picture shows that even as a little kid I already had that aggravating wave in my hair that torments me to this day. 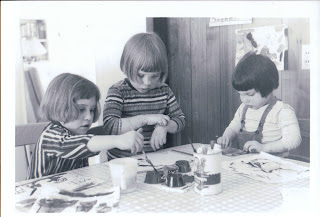 Now if I had my act together I would be able to post Pennario playing Schumann's "Scenes from Childhood," or "Kinderszenen" as it is in German. But alas, that is not yet on YouTube.

But there is this. Hahahaaa... I love how that one guy three months ago comments simply: "PENNARIO!"

Where was I? I was talking about my childhood. My friends used to kid me that I was a little space cadet but I guess all of in the family were little space cadets. Do you still use that phrase space cadets? Anyway, what I mean is that we lined up and obeyed like the Von Trapp kids.

No kids seem to behave like that nowadays and very few did back then, too. But that is how I know that it is possible that kids can behave. Because I was a kid and I remember that we did. There were things I was allowed to do and things I could not.

One more picture, of an orderly picnic. 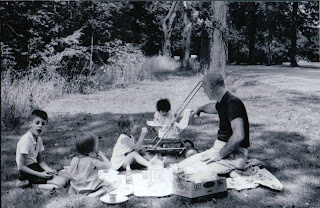 I wish I were going on a picnic now instead of going to work!

And you know what, looking at that picture, I realize everyone else in the picture -- aside from my dad, who has passed on -- could go on a picnic today. I am the only one working!

Where did I make my wrong turn in life?