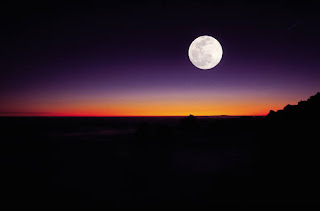 Last night I went to Artpark and it was a beautiful night with a full moon. My friend Lizzie went with me. Lizzie is a corrections officer and she was telling me that when there is a full moon the inmates go crazy.

My Uncle James used to be in charge of the Psych Center, the Buffalo Psychiatric Center, and my dad said that Uncle James said that when there was a full moon they had to put on extra staff.

Pennario had a hilarious story about what a woman said to him once after he played Clair de Lune.

Perhaps there was a full moon then!

It is fun to wonder what exactly happens when the moon is full. It is a barometric pull, or a magnetic pull? On the other hand I do not actually want to know. Once I saw a book all about what actually happens when you hear a Beethoven symphony, the neurons that fire in your brain, things like that. I stayed well away from that book! Talk about ruining the pleasure for yourself. What if you went tonight to "Beethoven Rocks the Harbor" on the Buffalo waterfront? When you heard the Allegretto from the Seventh Symphony you would be thinking all about your neurons.

TMI, as our public officials in Buffalo like to say!

It is best to savor the mysteries of music and the moon.
Posted by Mary Kunz Goldman on July 15, 2011