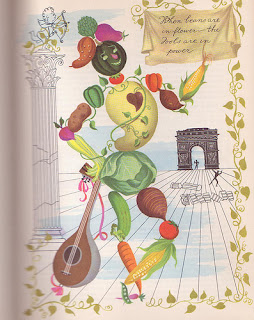 Garage sale find o'the day: "The Fireside Cook Book," by James A. Beard.
It is not James Beard. It is James A. Beard!
Perhaps this was his first cookbook. It dates from 1949.
I started looking through it because it looked charming and I was struck by how useful the recipes seemed, and how simple and doable. Next I was struck by the old clippings from the bygone Courier-Express that someone had carefully tucked inside.

One was a column by Archbishop Fulton Sheen. The headline read, "Man Finds Strength In Weakness."

Then there is another clipping headlined: "Drug Abuse Called Escapism by Rabbi." It is an interview with Rabbi Samuel I. Porrath, of Temple Beth Israel in Niagara Falls. There is a photo of the good rabbi shaking hands with Governor Rockefeller.

I am going to keep these clippings neatly tucked inside "The Fireside Cook Book." Years from now my heirs will puzzle over them.

Was she a drug addict, they will wonder.

Did she know Rabbi Samuel I. Porrath?

Continuing to page through this treasure, I was struck also by the retro drawings in the book. That is one pictured above! It begins the "Vegetables" chapter. Charmed, I flipped to the front.

That was when I noticed it was by James Beard. Ahem, James A. Beard.

No wonder the recipes are so good! I have other books by The Author, many of which were garage sale finds. One I found recently was "Beard on Bread." A great title! Before that I had, already, "Beard on Pasta." These are books I use over and over.

Above is the illustration that begins the "Vegetables" chapter. The script reads, "When beans are in flower/The fools are in power." That is the truth! Well, the fools are always in power.

Here is a typical page from "The Fireside Cook Book." 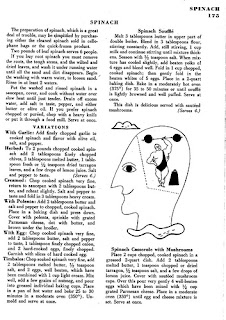 Isn't that illustration a hoot? Click on the page and you may read it and cook from it.

I have an, ahem, first edition but that is not saying much. The James Beard cookbook is a classic but from looking around the Internet I see that like the great Leonard Pennario vinyl records, it can be had for not much money. The best things are life might not be free but they sure tend to be inexpensive!

I paid $1.50. On Amazon you can find "The Fireside Cook Book" for 30 cents used, plus shipping which will run you another $5 or something.

Mighty good eating for the pennies it costs!
Posted by Mary Kunz Goldman on July 16, 2011