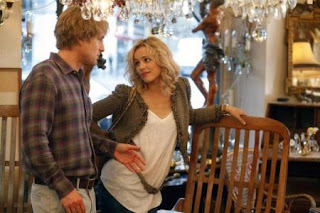 Last night to get out of the heat my mom and I went to the movies. We saw "Midnight in Paris."
It was fun although I could have done without the comments on Tea Party conservatives of whom I am, ahem, one. But you expect this in movies. Movie makers are herd animals. There is no getting away from it. And in this movie it was pretty easy to ignore.
What I loved best about this movie were its Woody Allen phony intellectuals.
Woody Allen loves this type and he always has great people playing them. The movie has Owen Wilson and Rachel McAdam, I think her name is, as this engaged couple in Paris with her parents. And right off what happens is, in a restaurant, they run into this hilarious couple, Paul and, I forget his wife's name.
Rachel's character, Inez, idolizes this pair. "I used to have a crush on him in college," she tells Gil (Owen).
Then Paul and his wife just take over their vacation and invite them here and there. And you see Paul trying to correct the guide at Rodin's studio (I was there!) and gassing on at Monet's house (I was there too!), etc. That couple was my favorite thing in the movie. I could watch them all night.
Meanwhile Gil's girlfriend, Inez, keeps putting him down. "Why don't you be quiet? You might learn something." She never lets up. The un-subtlety is part of the fun. She is just this hilariously nasty Woody Allen character.
There is a great scene where her mother calls these chairs in a shop "a steal" for $22,000. When Gil hesitates, the mother shrugs and goes, "Cheap is cheap." My mom and I could not stop laughing about that.
It was fun seeing F. Scott Fitzgerald and Ernest Hemingway and Cole Porter but the real fun were these phonies. I kept wanting to go back to them.
I was thinking -- I know, predictable! -- how much Leonard would have liked this movie. He would have gotten a kick out of it. We saw at least one Woody Allen movie together, "Cassandra's Dream." I still have the ticket in my wallet! I just ran across it the other day.
Ah, nostalgia!
Now, back into the heat.
Posted by Mary Kunz Goldman on July 20, 2011