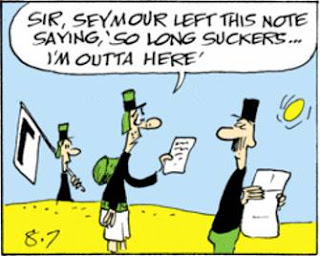 The Leonard Pennario Web log occasionally pays tribute to other people born in Buffalo and today we note the passing of Bill Rechin, the cartoonist who drew the immortal comic strip "Crock."

How I found out about this was totally an instance of, I could not get up out of my chair. I had eaten my oatmeal and the porch felt nice and I was sitting there drinking the last of my coffee and ... ah! The obituary page.

And there was this Bill Rechin. I am reading about his other strips, Pluribus and something else I did not remember, when, all of a sudden, "Crock"! 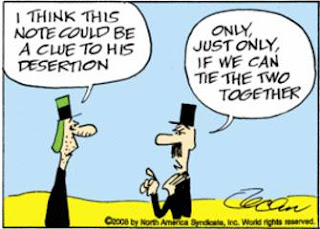 It is funny, I do not think I have ever written about it. We have written about Crock Pots but never about Crock! But "Crock" was a comic strip I used to love. It was about the Foreign Legion, a theme I was familiar with as a kid because of watching Laurel and Hardy movies -- a nerdy habit which later was to endear me to Leonard Pennario.

One thing I liked about "Crock" as a teenager was how mean it was. Rechin was always drawing guys with cannonballs in their stomachs. He did not pull punches as you can see by this illustration.

Also I was crazy about an off-and-on story line  involving the Lost Patrol, this group of guys perpetually wandering the world without a clue.

"Which way is east?" I remember one asked another once.

"It's the direction the sun comes up."

"Where does the sun come up?"

"I don't know but it used to come up by my window."

Ha, ha! I remember that one exchange. That is because my life sometimes reminds me of the Lost Patrol. Still, after all these years.

Reading up on it I see "Crock," like a lot of comic strips, was a team effort. One guy who wrote it died a couple of years ago. This Bill Rechin drew the pictures. Who knew he was from Buffalo? Why did this guy not get more local glory?

Bill Rechin went to St. Joe's as did a lot of fine men I know including my brother George.

Here is some inside-baseball cartoonist talk I cribbed from a cartoonist's site.


“He was a cartoonist’s cartoonist,” said Mell Lazarus, creator of “Momma” and “Miss Peach.”
Rechin’s signature is the giant nose. His unmistakable characters usually have sloping shoulders and drooping bellies.

Ha, ha! His signature was the giant nose. That is cartoonist talk for you.

Mell Lazarus is another cartoonist I love. But that is another subject for another day.

With luck, we will not have to wait until he dies!
Posted by Mary Kunz Goldman on June 08, 2011

Email ThisBlogThis!Share to TwitterShare to FacebookShare to Pinterest
Labels: Comics