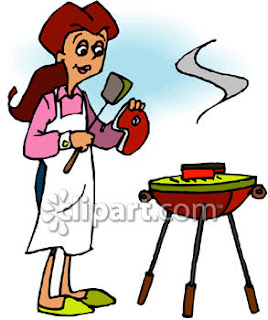 You know how that one girl made this fortune by cooking her way through Julia Child's "The Art of French Cooking," and then Web logging about it?

I am going to make my fortune cooking through "400 Barbecues."

Admit it, that would be more exciting!

I bought "400 Barbecues" at a garage sale last week and it is worth its weight in gold which is, trust me, quite a bit of gold. This is a heavy book! It has barbecued octopus and barbecued red bean and tofu burgers and -- this is the greatest -- barbecued kangaroo.

Needless to say this book is printed in Australia.

Yesterday I went to the Gulf station on Colvin and bought propane. This was a big step. We were not only out of propane for Howard's Millennium grill but our last propane tank had been stolen, I forget from what property. Anyway, it cost me an arm and a leg to get a new one.

On top of the expense my debit card did not work for some reason or other.

"It was declined," the store clerk said.

I tried it again. It was declined again!

I raised my hands. "What can I say?" I declaimed. "God is telling me not to buy this propane."

This guy in line behind me burst out laughing. That was funny because it was this guy in his 20s buying beer. Normally we would have had nothing in common, the authorized biographer of Leonard Pennario and this little man out buying beer, I am sorry. But all of a sudden he was looking at me adoringly because I was in his universe. When you are in your 20s you are used to debit cards being declined.

Unfortunately the card went through again and was accepted, ruining our camaraderie.

The good news was, I went home with the propane. Howard hooked it up to his old Millennium. Then we sat and laughed because as Howard said, his grill looks like an old boiler.

Old boiler or not, I am on my way, cooking my way through "400 Barbecues."