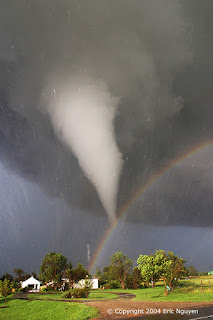 Just now when I got up and went out to get the paper it looked like this beautiful spring morning. It was so pretty that I even ended up daydreaming about this Mahler song I love. However! You could see the dark clouds on the horizon over the park. And sure enough they came rolling in.

Now the sun is on again, off again. The wind is blowing. Well, on-again, off-again sun is better than nothing. At least there are still patches of blue sky.

Ha, ha! From the nearby group home the guy who swears all the time is swearing.

That was him just now!

It is like the call of a strange bird!

Now the morning is quiet again except for the clouds rolling around and the winds picking up. We are having a most dramatic spring, that is for sure.

I feel terrible for other towns. There has been a tornado in Tuscaloosa, Ala., and Howard is worried about a friend of his who lives there.

Anyway, George and I were in Alabama, and we had the radio on, and the radio told us to beware of a tornado in Tuscaloosa County.

"Ha, ha!" we laughed.George and I always mocked things out when we were on road trips in rental cars.

Then about two seconds later we passed a sign. "Welcome to Tuscaloosa County," it said.

And as if on cue it got black as night!

Whatever we were in, it must have been a tornado. We did not actually see the tornado but my guess is, if you do not see it, it probably means you are in it. We ended up pulled over to the side of the road, craven and whimpering. Nature has a way of dealing with people like me and my brother George, that is for sure.

Imagine seeing a tornado. Looking at the picture above I realize I have never actually seen one. This huge funnel coming down from the sky. Like a big vacuum cleaner. Imagine it picking you up in your car and hurling your around.

Prayers for the people in Tuscaloosa.