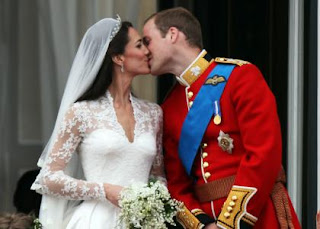 My mother was up at 4 a.m. tuning in to the royal wedding. Me, I was not that hard-core.
I awoke at the first glimmer of dawn but went right back to sleep.
Then when I got up it was torture because Howard wanted me to look at this and this and this on the Web, none of which was the royal wedding.
I had to wait until he was in the shower!
Then I flew to the computer and at least I watched the processional. Fascinating! That unnerving camera angle at the end takes you up to the rafters of Westminster Abbey, looking down about a mile to where Prince William and Kate Middleton are standing.
I liked getting a look at the gown. This is funny, I saw it described as ivory but in the picture above it looks white. Ivory is not quite the same as white!
I also liked hearing the music which, if you are a crazy music nerd like me, you can read about it here.
That must be Kate's dad walking her up the aisle. He is cute. I assume that is her dad. I really know very little about her family other than that her mother is an airline stewardess. Other people say flight attendant. I say airline stewardess! That would be she in the white hat at about 4:07. The look on her face is touching.
Imagine what is in her mind. Her daughter could wind up Queen of England. 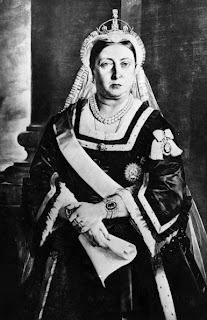 I have to say this, something about this seems wrong-headed to me. If you are going to go with a royal family certain rules must be adhered to and I do not think a prince should be marrying the daughter of an airline stewardess. I think it is imprudent, let us say, to detract from the royalty mystique.
The good news: You're a prince. The bad news: You should marry a princess.
Here is another opinion of mine sure to be unpopular. This morning I read in the paper that a British poll revealed that most Englanders, I forget the proportion, think that when Queen Elizabeth's reign ends, Prince Charles should step aside and let Prince William be king.
Um, excuse me?
No!
What, they think they can pick and choose their monarchs? That is not the way it works.
Besides which, you know what, you could do worse than Prince Charles. I do not agree with him on a lot of his wacky green issues but at least he thinks about things. He loves classical music. I am sure he knows who Leonard Pennario is which, I do not think you can say the same about Barack Obama.
And even if you do not like him over there in England, if you want his son instead because his son looks good on TV, guess what? You are stuck. Sorry.
Wow, this has been fun. You have to say this for the royal family.
They are endlessly entertaining!
Posted by Mary Kunz Goldman on April 29, 2011