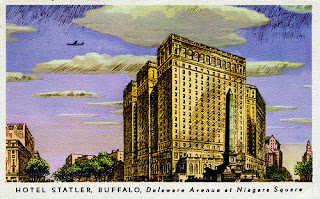 Today was a great day because the Hotel Statler finally sold. Remember the day Howard and I walked that one prospective buyer around the Statler? That was what, 10 months ago?

This has been a long and winding road, as many people said during the speeches that were made.

Howard played cocktail piano for the festivities. He played before and after the ceremony.

Last night, as if he were not nervous enough, I kept suggesting songs. I suggested:

And all kinds of other triumphant and optimistic themes. I kept suggesting them and finally Howard said look, he would play what he was going to play, and no one would know the difference.

We were both very excited. We are going to have our grand hotel back! Oscar Levant stayed here and Leonard Pennario probably did too although to tell you the truth I am not sure. I know Pennario stayed at the Lord Amherst but I am not sure about the Statler.

Howard and I were thinking that both our dads were looking down from that grand hotel in the sky and smiling. Howard's father, the accountant Samuel Goldman, had his office in the Statler, and my father loved the place.

Here is another postcard of the Statler. 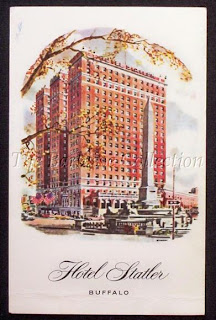 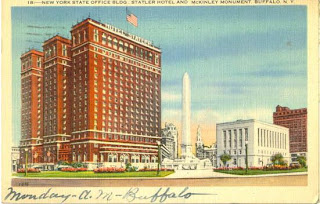 It is thrilling to think it will have new life instead of just rotting out like so many other things. The Rev. Darius Pridgeon, this Buffalo pastor, he got up and made a speech about how the buyer, Howard's friend Mark Croce, is like Nehemiah from the Bible. Nehemiah faced controversy and naysayers but still he built a wall, stone by stone. That is what will happen here.

Only in Buffalo do we get speeches about people like Nehemiah.

And cocktail piano by Howard Goldman.