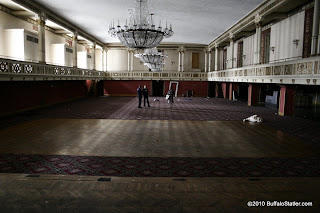 Howard has been selling the old Statler Hotel downtown and today I went with him when he showed it to a developer from Chicago who flew in to see it. Howard is not a broker and he is not getting any kind of a cut from this but we are showing it anyway.

Above is a picture of three of us in the Golden Ballroom. From left, barely visible in this extravagant space, are Ted (the interested buyer), John (the building's chief engineer) and me, with my purse.

I wonder if Leonard Pennario ever stayed at the Statler. I know Oscar Levant did!

Here is the Georgian Room. It has amazing carved woodwork. 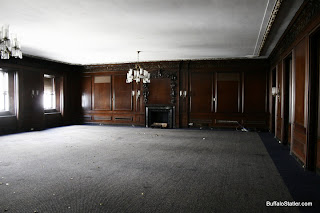 You would think they would not leave this garbage lying around the Statler, you know, I mean if they want to sell it? Our Facebook friend Justine Jopp was just writing, she wants to go wild in the Statler with a bottle of Liquid Gold and a soft cloth. I would, too! Or maybe we could send in Larry Solomon.

Here I am with the maybe buyer looking at the notice telling us that among the people who have stayed at the Statler were Chiang Kai-Shek and Charles Lindbergh and Queen Marie of Romania. 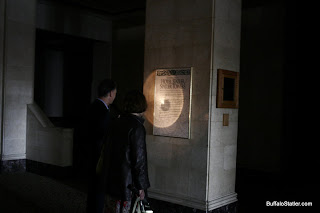 I guess Leonard Pennario did not stay here, otherwise I am sure he would have been mentioned in this notice!

We also read that in the 1950s, when the Statler was sold to the Hilton hotel empire, it went for $110 million. That is a lot of money! As Mr. Chicago said, it is a lot of money now but imagine what it was in the 1950s. It was the biggest hotel transaction in history! That is what the notice said.

Will we have another transaction now?

As we wonder we watch the trailer to "Grand Hotel."

Isn't it funny, that classic movie uses the "Blue Danube" Waltz, the same piece we were just listening to Pennario playing. What is this all adding up to?

A happy outcome for the Statler, I hope!
Posted by Mary Kunz Goldman on May 04, 2010

What an awesome joint that is! Had to zoom the picture though, to see you guys, lol.