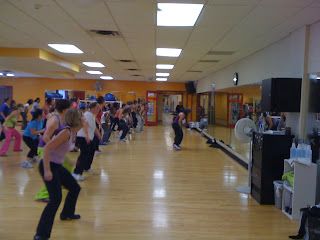 Sunday I took this picture at the Hip-Hop Master Class I attended. Ha ha, I cannot believe I am writing that. And I have to admit through most of the class I had trouble not laughing.

I just never would have pictured myself dancing to this thundering rap, is all. With the turntable screeching and everything. Partly because I was laughing, I just had a blast. We danced to hip hop for an hour and a half. Nonstop! And you had to follow the teacher on the fly. She did not warn you as to what she was going to do next. In the picture you can see everyone poised, ready to follow her next move on the spur of the moment.

I took this picture of myself in the fogged-up mirror. 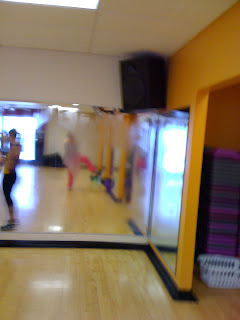 That is me in the pink pants!

Through most of the class I felt like Jerry Lewis. I am the one person in Buffalo least qualified to dance hip-hop. From time to time the teacher would turn to observe us critically.  She gave me this look once like, what in the world?

My friend Gail was dancing next to me in the front row. Between numbers once when I could catch my breath I pulled her aside.

"Gail," I said. "If you are embarrassed to dance next to me, I totally understand."

We were laughing and laughing!

I kept laughing imagining what Pennario would have thought. He had these things he would say when we were out somewhere and they would play this pop music on the sound system. I could just imagine what he would have said about this stuff. This teacher, her name is Liana Veda, you can get a look at her artistry here. Ha, ha! I am watching that link and listening to it and it is all in Spanish but all of a sudden you hear the English words, "funk phenomenon."

That is the part of the video where they are talking about me. Liana Veda is talking about this master class she gave in Buffalo and in the front row, in pink pants, she saw a funk phenomenon.

We danced to that song. I recognize it.

Seriously, I do not know what it is, but I just love to dance. I was fascinated watching this woman, really, how just a little tip of the head or the hand can make a difference. One thing you have to have is attitude, too. "Attitude," our teacher Mary is always shouting at us in her Zumba class. You cannot seem timid. If you have attitude you are 75 percent of the way there, I would say.

Attitude--Remember if you have the right attitude you can fake your way through almost anything except brain surgery...

Just like what a mutual friend of our says (and I won't tell you who it is) "Republicans just don't have rhythm."

Mary, about attitude, you are right! I have learned so much from you.

But Prof. G, Pennario had rhythm! Maybe he was the exception that proves the rule...

Don't worry, I'm one of those commie liberal dems who can't dance a step, whether quadrille or rap.

I want to dance a quadrille!

Where was that hip-hop class in your Funk Phenomenon post? It looks like a great dance floor. I'm always on a look out for floors like that in Buffalo to hold dances for SwingBuffalo.com.