When I am working on my book it often makes me think of "Snow White," the 1937 Disney cartoon.

That is because once I read an interview with an animator who worked on "Snow White." He said that he and a team of colleagues took something like a year to craft just one single scene, when the Seven Dwarfs are returning from work and casting shadows on the mountains.

Those few seconds took a whole team a whole year!

That is how I feel writing this. This morning, here I am, up early, and I am working on this one paragraph about this one concert in 1965, the Los Angeles Philharmonic, Zubin Mehta conducting, Pennario playing Brahms ... just an insignificant concert, you would think, except it shows me something, and I am trying to put what that is into words in a way that is not boring to anyone but me.

Twenty minutes, half an hour go by. I am moving phrases around. There is something somebody told me and I lift it from later in this chapter and move it up. Now something else has to be changed. It is like Rubik's Cube.

It is like "Snow White and the Seven Dwarfs." 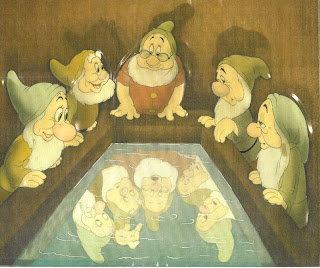 Wow, the intricacy of that picture! I wonder how long it took a team of animators to work out that scene.

I am not discouraged. I am pretty much done with a good draft of the whole book and after that things should move pretty quickly. Besides I want this to be right. It is normal that it has taken the time it has.

It is just that I am just amazed sometimes at the work involved. That is why I do not write more on the Web log about the process. Week in and week out this is what I do. When I am not thinking of what that gentleman, that animator, said about "Snow White" I am picturing an ant crawling up a mountain.

At least Howard is encouraging. This morning I told him about the "Snow White" thing.

hang in there, I'm sure the book will be great.