Turkey in the sink 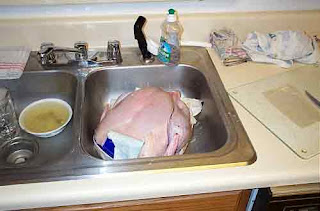 Here it is just Wednesday and already we have had our first Thanksgiving turkey crisis.

Thanks for that goes to my friend Lizzie. Lizzie and I have been friends since I was 16. She is now a prison guard in the Finger Lakes but when she is not there she lives in the Town of Tonawanda. On the same street that Howard grew up on! Is this a small town or what?

Lizzie called me last night in a panic. Apparently it was her niece's job to pick up one of those 38-cents-a-pound turkeys and deliver it to her house. The niece had done that, a few days before. However! The niece had not put the turkey in the fridge. She had left it in the sink.

So there the turkey had sat, for 48 hours.

Me, I would have been torn about what to do. I mean, that big ol' turkey is a big ol' block of ice when you buy it. I would imagine it would be OK for a while. But Lizzie being a prison guard is a no-nonsense type and so tossed the turkey and bought a new one.

As we have delineated before, to get that 38-cent a pound deal you have to spend $25 on other stuff. So she did that. Now she was on the phone raging about it. Her niece is brilliant, just graduated from some big military academy, West Point or something. Her niece is no dummy. What was her niece thinking?

Secretly I was thinking, that sounds like something I would do, leave a turkey in the sink and forget about it.

So I tried to soothe Lizzie. You did not waste $30, I reasoned with her. You wasted $5. That is what the turkey cost. The other $30 went on other food. Stuff you will use.

"Thanks," she said finally. "I feel better."

That is what we are here for!

To talk about two things, Leonard Pennario and turkey.
Posted by Mary Kunz Goldman on November 24, 2010