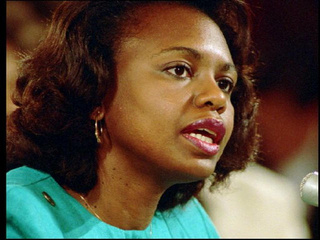 It is weird to hear Anita Hill and Clarence Thomas back in the news!

That is Miss Hill up above. I remember that business almost 20 years ago. Those hearings, with Hill and her entire family. Her entire DAMN family! I know, this is a family Web log preoccupied with the Latin Mass and with Leonard Pennario. But since the publicity surrounding the Rent is 2 DAMN High Party it is hip to put "DAMN" in everything you say.

Anita Hill and her whole DAMN family were all sitting there on TV and while she gave her testimony, my friend Lizzie and I were watching and we could not believe what we saw. I always remember, I was packing for Vienna. I was throwing things into a suitcase as we were laughing. I was leaving for Vienna the next day with my mom. We had just decided the day before to go and that was back in the good old days when I did not have a job.

When I did not have a DAMN job, I should say!

So yes, Lizzie and I were shrieking with laughter. But it was all unfair and DAMN damning to Clarence Thomas and we realized that even at the time. My dad, who was fascinated with the proceedings, offered the best explanation I have ever heard for all of it. He said the truth lay somewhere in between what Clarence Thomas was saying and what Anita Hill was saying. There are these gray areas and this was one. He said they probably had some kind of flirtation going on at one time, or maybe more than that. These are human things that often happen in the workplace and this was one of them.

What is with me? Here I am writing about my dad again and his opinions. Just the other day I was remembering how he bossed me to interview Andre Watts, which I did. Although would you believe it, just yesterday, Mr. Watts postponed his concert. After all this DAMN work!

Anyway. Anita Hill. She had no DAMN business trashing his reputation. I think Clarence Thomas' wife is right to bug Anita Hill for an apology, if that is in fact what happened. Here he is this justice on the highest court and he has always been kind of a laughingstock because of this. It has more or less driven him into hiding. You never see his picture anywhere.

It is just too DAMN unfair.

During those hearings, a friend of mine, both black and a bit of a womanizer (I'm neither) offered me his informed opinion - more informed than I am anyway - when I asked him. Referring to Justice Thomas, he said, "He's guilty as hell, man. He just fooled around with the wrong girl. (He didn't say fooled, I'm just respecting your sensibilities)" On the other hand, my mother in law said of Anita Hill, "If she stayed in her kitchen learning her pots and pans like she should have, this wouldn't be going on." I think my opinion wouldn't please you, so I shall stop here. Cheers!

I am one of the few that escaped the news furry of the Anita Hill hearings... I was in US Army Basic Training the whole time...cut off from the free world...