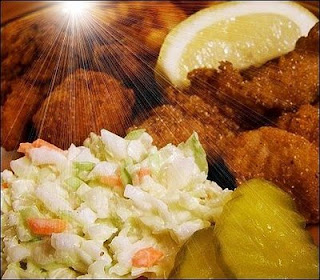 It is Friday and all I can say is TGIF! That is a quaint '80s expression I love. All week I have been working like a pack animal. Hence my carping about Wegmans and Anita Hill.

Today I am thinking of calling my mother and seeing if she wants to go to the Edge of Town. That is a thing we do on Fridays. Sometimes we go for dinner but last week we went for lunch and that was fine too!

My mother likes the Edge of Town because it serves mom food like fish fries and liver. She is also thinking the owners are Catholic because whenever we have gone on a Friday they have had a vegetarian or fish soup.

My mom still does the no-meat-on-Fridays rule all year round, not just in Lent. I do it now too. I mean, if I go to someone's house for dinner and the main course is chicken or whatever, I eat it, no big deal, because religion is not about being rude about little stuff like that. But in general I try to observe it. It is kind of a pain but it does not hurt anyone plus it reminds me of who I am and that there is a world after this one.

You mean the meaning of life is not Leonard Pennario?

Sometimes I think it is, I admit that!

Back to the Edge of Town. I go one sometimes about these Forgotten Buffalo tours which take you around to all the old taverns.The Edge of Town is one. I share Forgotten Buffalo's concern that they might be vanishing, along with other old things that have fallen by the wayside like no meat on Friday. Try skipping the meat on Friday and you realize how few places cater to you anymore. In some older places, historic taverns I love like the Edge of Town or the R&L Lounge or the Eagle House, most of the Friday specials will be fish. But in many other places they are not. Sometimes you can hardly find anything you can eat.

The Catholic Church should never have relaxed that rule! Because now it gets to be Lent and we are all stuck with it being much more difficult than it used to be.

Back to mom food such as what is found at the Edge of Town.

The other day my mom had me pick her up some liver sausage. I believe old German food like that will be disappearing. Here is something else that is disappearing: Fastnachts. That is short for Fastnacht Kuechles. They are these German sort of friedcake doughnuts that I guess used to be eaten on Fridays when you were fasting, or going without meat. You can still find them sometimes during Lent but I think in a few years you will not be able to anymore. We are all on diets and everything is all about Mediterranean food.

Luckily some old German food will be sticking around because German food pretty much equals Jewish food. Gefilte fish, yummy things like that, I think we will have that for a while. Once I took my mother to Katz's, the Jewish delicatessen in New York, and she was in heaven! Everything appealed to her. We ended up ordering just about everything and there was way more than we could eat.

I wish we had a good Jewish delicatessen like that in Buffalo because I would take my mom there.

But we would always find time for the Edge of Town!
Posted by Mary Kunz Goldman on October 22, 2010