A toast to the 12th century 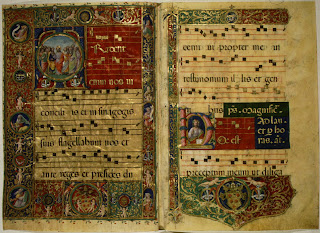 It is so strange how the weather changed today! Granted it is unseasonably cool but today felt as if winter were around the corner.

That second Kyrie captured the mood of the season. It makes me think of Russia and "Dr. Zhivago." It is from the 12th century. At least the 12th century! It could be older.

If I could get on a time machine you know me, I would want to go back to the 1950s and hear Leonard Pennario premier Ravel's solo-piano "La Valse." But if the time machine overshot my destination and took me back to the 12th century, I know where I would go. I would go to Mass! Because I would know the Kyrie.

Imagine that, you are shooting for 1952 and you get a surprise.

And you could not go back!

The machine would not be perfect and there you would be, stuck in the 12th century. With all kinds of medieval illnesses and no decent plumbing. However luckily I would be able to go to Mass and understand it like a native. And because of my time in the medieval club I would be able to dance the pavan and the galliard and the Pease Bransle and do halfway decent embroidery and do three kinds of calligraphy: Gothic, Celtic Roundhand and Roman Uncial. Those are life skills I carry with me!

Plus I would not have to go to the office. Think of that.

Perhaps the 12th century would not be too bad.
Posted by Mary Kunz Goldman on October 03, 2010