Under the Des Moines sun Last night I was over at my friend Gary's and it rained and rained and rained. Which was wonderful because we were out in Gary's Florida room and it was fun to sit back and sip Gary's homemade Cabernet and listen to the rain beating on the roof.

We also tasted grappa that Gary brought back from Italy! The priest at my church, Father Secondo, makes grappa. Remember, when I called Cardinal Egan about Leonard Pennario I was supposed to tell His Eminence, that being the Cardinal, that the grappa priest said hello.

Everyone should be lucky enough to deliver such a message! I have a feeling that was when Cardinal Egan knew I was an insider to be taken seriously. I was not just one of the nameless faceless legions calling him to ask him about his friendship with America's greatest pianist.

At Gary's Howard sipped a glass of grappa at Gary's and I just took a little taste. It was dry and spicy and seemed to evaporate in your mouth.

Then I took another taste to reassure myself I was right. Yes, that was how it tasted.

Better make sure. I took one more taste.

Howard does, too. "Yeah, I like that grappa. It's unusual." That is what he just said.

It is good to have Gary back from Italy because he was gone for so long. He was there for three weeks. With him back the world is right. Soon it will be time to make our annual trip to the Clinton Bailey Market and buy grape juice for our 2010 vintage.

Here is one thing I have to write, I just have to! Gary went to Cremolina in Tuscany to stay with these old friends of his. They are married and they have lived on this vineyard for 10 years. He told us about this months ago when he was planning this trip. And something in me went sour and I was thinking: Where did I make my wrong turn in life?

Somewhere along the line this friend of Gary's made the right decision and managed to land herself at this picture-perfect vineyard in Tuscany where she lives with her husband and raises their kids. And me, why am I not in Tuscany?

Guess where this Tuscan couple are now?

It ends up they were just renting the vineyard and since Gary left, they have left, too. They were going to go to South Carolina but instead they went to Des Moines where somebody's family is.

Ranging around the Internet, I am thinking Des Moines may not be that bad because this building is supposedly in it. 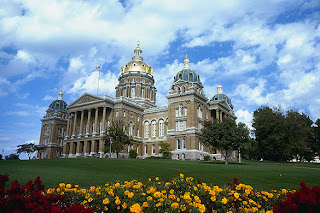 But still. As Gary's friend Herb said last night: "That's got to be a switch."

I hope they brought some grappa with them.
Posted by Mary Kunz Goldman on August 22, 2010

Email ThisBlogThis!Share to TwitterShare to FacebookShare to Pinterest
Labels: Alcohol