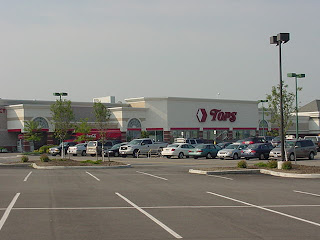 Today I went to Tops at University Plaza. That is not it up above but that picture is close enough.

But I digress. Back to Tops! It was like going to the Third World!

The lines at the registers were long. That is one thing about Tops, you can never get out easily. Shopping in there can be OK but wait until it is time to check out. The screamingest kids were everywhere. There was an express line but it was hard to make out which one it was and where it was supposed to tell you the maximum number of items, you could not read it.

I got into the line because I was just getting a few things for my mom. And it was fascinating. The line next door was the Automatic Checkout Line. I think I tried this once and it went OK but that was not enough to make me do it again.

People kept trying to check out in the automatic line and you keep hearing this woman's recorded voice, like out of a sci-fi movie. "Item scanned," it might say. Most often it said: "Please wait for attendant."

That was what I kept hearing, over and over: "Please wait for attendant."

Human beings are not going to be replaced any time soon, is the message I get.

I asked the checkout guy: "Doesn't it drive you crazy, being next to that?"

He was this calm individual and he said: "I tune it out."

By the time I left Tops I felt as if I had been through the wringer!

On the bright side I did score pork tenderloin for $1.99 a pound which is just about as cheap as you will find it. Everything else in Tops was expensive but that pork tenderloin was cheap, and we found each other. I also found reduced bananas for my mom. And my mom, perhaps out of gratitude for my running this errand, let me talk about Leonard Pennario. I could not believe that. She actually asked me questions and I had this orgy of talking about Leonard Pennario. Now that I think about it I feel a little uneasy. I hope my mom was all right, you know? She never lets me talk about Leonard Pennario like that.

After that I drove to Zumba class in the middle of the biggest rainstorm of my life and after that Howard took me out for sushi.

What an eventful evening!
Posted by Mary Kunz Goldman on August 09, 2010

Your posting reminded me of the Tops at Maple and Transit only instead of screaming kids it is all the elderly folks from the retirement community across the street. Nothing against the elderly mind you (I'm rapidly approaching 68) but it still isn't easy to check out quickly. And to top it off they proof me for beer!