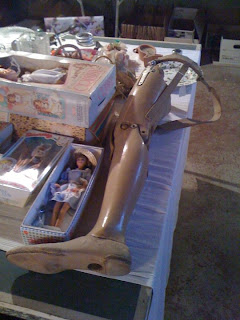 I put this picture on Facebook but our friends out in Blog-O-Land did not see it yet. It is a prosthetic leg! It was in the basement of an estate sale. They were asking $250 thank God otherwise it would have been hard to resist, I will tell you that!

Howard said it was great that whatever mind organized the estate sale knew that the prosthetic leg should go next to the Barbie dolls.

Wow, that was over a year ago! And I still had the braces on my teeth.

After Howard asked for leg captions the following conversation ensued:

How about, "I told the wife to buy herself something pretty".
Yesterday at 1:58pm ·

Someone doesn't have a leg to stand on.
22 hours ago ·

Other than that there was no excitement. No Leonard Pennario memorabilia, no autographed pictures of John Gilbert, no rare missals or Rosaries, no menus from defunct restaurants.

However I am a fan of old fans and here was a parade of dandies. 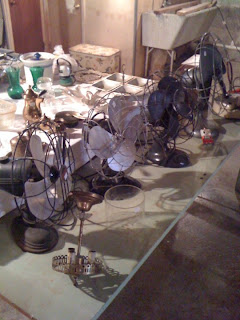 There was also a classic old scale.

Not so sure about the leg but, I adore that picture with the turtle, lol!