Why did the turtle cross the road? 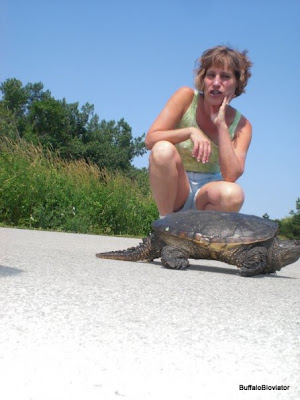 Ay me, here it is Monday morning! And how I am wishing it were Saturday.

That was when I saw that turtle pictured above!

Howard and I were walking in Delaware Park and we took the route around the lake. There is one section of the path where it is beautiful and quiet and you can hear the birds and for a minute you forget all the slugs and schufts who like to make noise on summer days with their car stereos. Why doesn't the mayor ban car stereos in city parks? There is a question we can all chew on.

While we were walking down this path we stopped for a moment to stare into the water of the lake and watch the fish flitting about. It was like watching an aquarium. Howard pointed out how every fish had its own little territory and would snipe at other fish who got near it.

When we turned, a gentleman was standing in the path. "Look," he said.

And he pointed at this turtle crossing the road!

He said the turtle had just come out of the bushes. Now it was making its way across the road, one clawed foot in front of the other. Howard marveled at its single-mindedness of purpose. It is like me working on my book about Leonard Pennario!

The turtle seemed conscious of us but unafraid. It must have known that if we did anything it could either snap at us and take off one of our fingers, or else disappear into its shell. We did not know what it would do and we did not want to find out.

With immense dignity, its head held high, dragging its prehistoric tail, it kept on walking, ponderously and steadily, until it reached the water on the other side that it somehow knew was there.

It simply dropped in, like a stone. For an instant we saw it, swimming gracefully away, all four legs stretched out and paddling. Then it disappeared.

It is in the lake somewhere! Our turtle! A half an hour later when we were boating ... 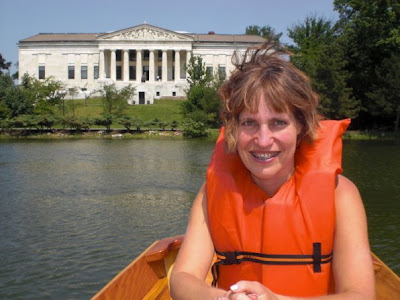 Do watch that link. What a Schubertian morning I am having. I am supposed to be getting to work and instead I am listening to songs and looking at pictures.

Speaking of pictures Howard put that picture of me and the turtle up on Facebook and he asked for captions. You would not believe what people came up with.

"There should be a hare coming along any minute now." Budd Bailey, our sportswriter, wrote that.

"On second thought, why rush this whole Leonard Pennario thing?" That is my friend Carl Herko who works at the Portland Symphony!

"I see another authorized biography in the making." That is Marto Vago who is married to my piano teacher, Stephen Manes.

"Wanna race?" That is from my athletic friend Michelle Wlosinski.

"I don't know what the dentist gave me for this @#$*& tooth, but now I'm seein' prehistoric reptiles..." That caption is from our photographer Bob Kirkham.

"That's it! I'm never drinking anything Gary makes again, ever!" Dave Lundy, the actor, wrote that.

"Hmm. I wonder if he fits into Howard's new chair?" Ha, ha! That is my piano teacher himself, Stephen.

"Zut alors... now what would Leonard Pennario think of all this waste of time?!" My Facebook friend Toni Taber whom I met last week at Niagara Square wrote that. Toni, I shudder to think what he would think! Zut alors indeed!

"I'm so damn lost. Where's the Appalachian Trail?" That from our editor Scott Scanlon!

"See what just once kiss will get you." Our friend Kenny Larkin wrote that.

My friends Melinda and Lizzie made jokes about soup. We do not want the turtle to hear those! And Jeff Cooperman wrote the caption I used as my headline today.

Then Howard himself wrote something: "A magnificently engineered creature! ... and the turtle isn't too bad either." Hahahahaha!

There were so many good ones, I do not have time to copy them all. Oh! I forgot this one!

"I'm sorry Howard, I thought I had one more wish left." Our friend Art Page came up with that.

Now here it is Monday morning and ay me, I am in the mood for nothing but fun and games.

That turtle was moving faster than I am!
Posted by Mary Kunz Goldman on June 29, 2009

Why did the turtle cross the road? Appearantly to get to the water. Really, I have no proof though. However, I am not too surprised that you were there to capture the moment! Great photos!

Just wanted to come back and thank you for the lovely Schubert lied 'Auf dem Wasser zu Singen'. I cannot get enough of it and it has become my favorite version. That was a great find!

Larry, so nice of you to get back to me about "Auf dem Wasser zu singen." That is the greatest song!

Here is something funny: Once I walked past our mail room at The Buffalo News and I heard "Auf dem Wasser zu singen." I could not believe it. I looked in and there were all these mailroom guys, sorting mail, doing their work, in silence, listening to this Schubert song. Surreal! I loved it! Now whenever I hear this song I think of that.