A screech in the night 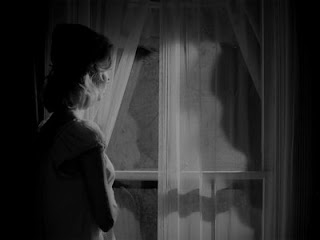 The day begins early at the Leonard Pennario desk and this morning at 4:30 my work was interrupted by a screeching of brakes, followed by a loud crash.

While not exactly unusual in our urban neighborhood, a noise like that is startling nonetheless. I went downstairs to see what I could see. I figured it happened at the nearby corner. But I saw nothing.

Then I heard Howard up and padding around and he came downstairs.

The crash had awakened him. And unlike me, while he had to rouse himself from sleep, he did not have to pull himself away from what Pennario was doing in 1955. So he was more alert than I was. He had gone to the window and figured it all out.

Howard said what had happened was a car had plowed into an electric pole at the corner. After that the driver had apparently hopped out and was running.

"They're looking for him," Howard said.

And sure enough, there were police cars at the corner.

I had assumed the guy was drunk. Howard said while that was a possibility, maybe the guy had stolen the car. Maybe he had robbed some place and was making a getaway and crashed.  "I heard a noise outside. He's going to be trying to hide. He might be in our yard. Don't open the door."

All of a sudden it is like "The Girl With the Dragon Tattoo." Not that I have read that book but everyone I know is talking about it and now it seems I am in it!

"Don't go out and get the paper," Howard said.

Imagine, I would step out in my pajamas to pick up The Buffalo News and a masked man might grab me.

Now it is almost 7. Am I allowed to collect the paper yet?

Perhaps the driver of the crashed car is still out there!

Maybe it is like that "Carnival of Souls." He walked away from the crash and now he is at my door.

Will I ever be able to leave the house again?
Posted by Mary Kunz Goldman on June 22, 2010

I am in suspense!

Hopefully, it all ends better than 'Carnival Of Souls'.