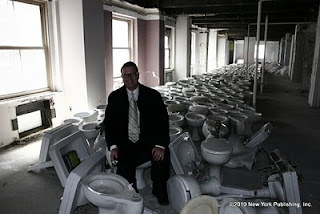 Today Howard is in the limelight! He is featured in an interview on our local station WBEN-AM.

I stand in awe of his blinding celebrity. Well, I sat in awe anyway. We were at the breakfast table listening to it. Howard winced every time his voice was heard on the air. He said he had been so nervous that he felt as if there were weights on his chest.

I said, "Howard, you sound like a total brain."

He said, "I felt as if I sounded completely the opposite."

Ha, ha! Now he knows how I felt when I was on Performance Today, on Piano Puzzler, talking about Leonard Pennario. I still have not listened to that broadcast!

It is not easy being on the radio when you are used to sitting and writing and editing your words.

Just as it is not easy for radio people suddenly to have to sit down and write. It is like when that national broadcaster had to write a story about St. Gerard's Church: You get phrases like "for all intense purposes."

It can be hilarious when we are forced to enter each other's territories and now Howard has found out what it was like in Radio Land.

Back to the Statler. We passed it the other night when we were walking from Big Blue to the Kenmore East Reunion at the Buffalo Convention Center. And there was all this garbage floating around on the sidewalks. Bits of insulation, particularly. We figure it comes from the courthouse that is under construction across the street.

It did detract from the curb appeal, I have to say that!

So did the garbage kicking around the inside of the Statler. Although we did get a kick out of the Land of Toilets, pictured above. A floor full of toilets! Picture that.

As real estate agents love to say: Bring your imagination, and let's talk.
Posted by Mary Kunz Goldman on May 10, 2010

Howard, that was interesting and, very impressive!

Mary, you have not listened to your Piano Puzzler episode? And it goes back to September. You really should listen. You sound both delightful and very knowledgeable. The story about Haydn was funny, enjoyable and, informative. I sure would have never guessed the answer, 'Hey Jude', lol. Well done!

Can I have yours and Howard's autographs? :)

Are you sure that photo's in Buffalo and not a set from "Little Shop Of Horrors"?

That photo's in Buffalo? I thought it was a set from "The Little Shop Of Horrors".