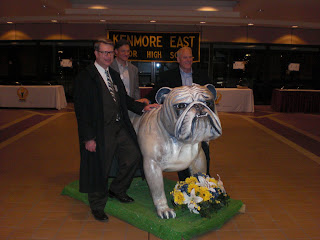 Last night I went with Howard to his high school reunion at the Buffalo Convention Center. Well, it was not his specific year. It was for all graduates of Kenmore East High School, whatever year you graduated. So there was a wide age range.

The theme was "Forever Young." Hahahaha!! They must make that the theme for every reunion. They must have that big sign that they trot out. And they had the lyrics to Rod Stewart's "Forever Young" printed in the program and Joyryde sang it. The band Joyryde is Buffalo rock royalty. They are in the Buffalo Music Hall of Fame along with Leonard Pennario.

Above is a picture I took of Howard and his friends Dave and Jeff Van Stone with the school mascot.

My friend Lizzie also went to Kenmore East and here is a picture she took of Howard dining. 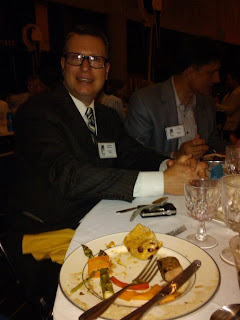 An action shot of Howard on the dance floor! 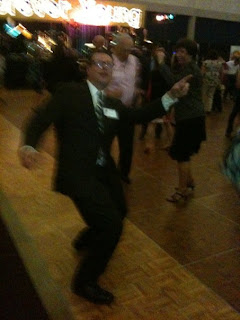 Howard and I were laughing that our generation is not going to grow old gracefully.

Imagine rest homes of the future. What are they going to be like? Right now they are full of Glenn Miller and Lawrence Welk and you can joke about how square they are but they had some dignity.

Imagine a rest home throbbing to the themes of Michael Jackson singing "The Chair Is Not My Son."

Or when the generations who are nipping at our heels show up in nursing homes with their tattoos and Beyonce and Valley Girl talk. It will happen! At special rest home occasions you will be hearing, "If you like it then you shoulda put a ring on it ... uh uh uh ... uh uh uh...."

I will tell you this, sometimes I would like to go back to 1959, the year Kenmore East was founded. I could hear Leonard Pennario playing Prokofiev with Fritz Reiner.

Awesome! Wonder what my upcoming 45th will be like! A bunch of old wore out hippies, no doubt.