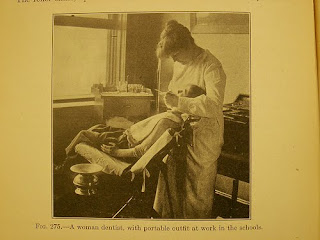 Today I went to the dentist. I was there for all of five minutes!

They sat me in a chair and barely glanced at me. Then they asked what the endodontist had said. I just stared at them. I could not think which dentist they meant!

Then I figured it out. They meant the endodontist where I had handed over my card for Fat Bob's by mistake instead of my X-ray. That would be Dr. Stern. Wow, was that really two months ago? I told them three weeks. I have no concept any more of the passage of time.

The dentist then looked pessimistic and said she would have to call the endodontist and see exactly what he had said about my not needing a root canal. I do not know what it is about me and dentists. I get the most pessimistic and most negative dentists. This one in particular is always rolling her eyes and sighing. It was as if her name were Dr. Stern! She was stern, I will tell you that.

She goes into great detail telling me about what is going to be done to my mouth. Today she said, "We are going to have to file the tooth down, because that is what Dr. Benatovich wants, and ..." Dr. Benatovich is my periodontist. He is another of my cast of thousands.

I yawned: "You know what, don't bother telling me about it. It's all Greek to me."

It is just not a good idea for a dentist to explain things to me. Once at my old dentist I passed out when they merely described pulling my wisdom teeth. I fainted and they had to continue the conversation with one nurse giving me a glass of orange juice and another nurse holding my hand. That was not when I was a kid either. That was just a couple of years ago. That is the way I am at the dentist. The less I hear, the better.

This dentist said then she was going to have to call Dr. Stern the endodontist and hear for herself what went on there in his office. She left the office to go and call him.

The assistant asked: "Do you want a magazine?"

I said no, I had my iPhone and that would keep me occupied. I thought maybe I could listen to Leonard Pennario playing Chopin or something.

No such luck. The dentist was back in a second with, you guessed it, bad news. Dr. Stern was out of the office. There was no getting a hold of him to discuss my teeth.

Well, it was good practice, anywho.

Getting information out of a dentist is like pulling teeth.