We are on the air 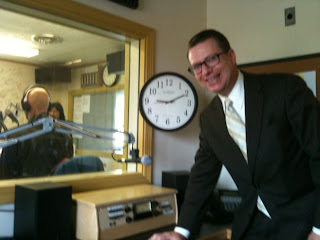 Today was a long day full of adventure. For one thing Howard appeared on a morning talk show on WECK-AM Radio, 1230 AM. Host Christina Abt was interviewing him about Big Blue. 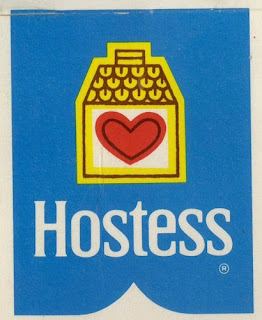 ... is today's big question. If you are holding a party and you are a woman then you are a ...

....but when you are on the radio I am not sure. Well, this does give us a good opportunity to contrast the old Hostess logo with the new. That is something for sure anyway! When I was looking for the old logo, which is the one with the blue background, I read a comment where someone said that if you are lucky you can sometimes still spot an old tractor-trailer with that picture of the stove with the heart.

From now on I am going to be keeping my eyes open!

Back to Howard on WECK. WECK used to be the old-fogie music station which is when I used to listen to it. "Old fogie" is a great term. Leonard Pennario used to like that term and there is one quote in the book where he uses it memorably.

When WECK was an old-fogie station it would play songs from the '40s, '50s and '60s. The '60s were pushing it a little and sounded out of place. They used to play "Leaving on a Jet Plane" and I forget what else '60s songs, not many. The '40s and '50s dominated. Nat Cole was in regular rotation with "Unforgettable" and you would also hear that great song "Jean."

What a video! I should have been a teacher not a music critic.

Now WECK does interviews and things and they no longer play "Jean." But Christina Abt does a fine show. First she interviewed a couple of folks who were helping clean up New Orleans after Katrina. One of them is the bald guy in the picture at the top. He looked great in his headphones. That was why I took that picture. Unfortunately it is out of focus because I was laughing so hard.

Here is Howard on the air carefully considering his answers. On the left is visible Christina Abt. 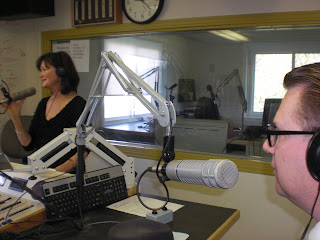 Christina Abt asked Howard many probing questions about Big Blue. Howard talked knowledgeably and began by articulately citing and promoting Father Dunn's book "Delaware Avenue: Mansions and Families." A must for any Buffalonian!

I could think of nothing to say because I had not slept much the night before, for reasons I will get to. So I pretty much just laughed.

It was fun to be in a real live radio station!

Ryan. Dont sit under the apple tree was a world war two favoriite of the ww11 vets who fought and died so you can listen too whatever you want to on the free air of this country. Thank a vet today!!

My mom loved WECK and sometimes I'd catch her crying hearing a song that I know brought her a lot of memories. I was so mad when they changed the format and took that simple pleasure away from her.

Richie Reimers is my sister's father-in-law. His son David, my brother-in-law, got us hooked on WECK years ago. Once in my jazz piano days I was working on "Long Ago and Far Away" and David said, "I see you've graduated to playing WECK songs on the piano." I miss WECK too.