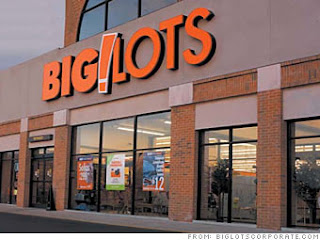 Surely we live in the golden age of Small Electrics. I went the other night to Big Lots with my mom and I was agog. My mom is looking for a coffee maker. She knows exactly what she wants.

She wants her coffee maker to be black and not white. Black does not show the dirt! Plus it is to be taller than it is wide. And if it has a basket that swings out, the basket should swing to the right and not to the left.

This is a tall order but the good news is most coffee makers are so cheap.

True, they are still not as cheap as they could be. What I really love is that plastic cone that fits over your cup and you put a filter in the cone and put the coffee in it and pour the hot water through it and that is it, beautiful and simple. I think there is a conspiracy against those cone single-cup coffee makers ... 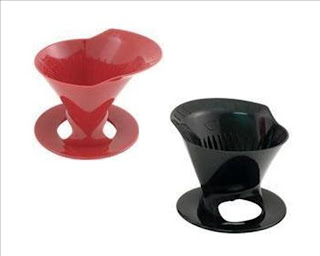 ...because you cannot find them anywhere. They are too cheap and too simple! I used to have two but Howard has taken both of them and I cannot find one to replace them. When I went to see Leonard Pennario in California I could not find a single-cup cone to bring and I could not find one in California, either. I suspect that the makers of the more elaborate coffee makers ... 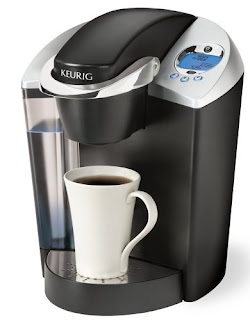 do not want them around!

Regardless, it is still impressive, the range of machines you can get for not much money. At Big Lots the high-end coffee makers were about $55. There were a lot of cheapies for between $10 and $19 and from time to time I tried to bring one of them to my mom's attention.

My mother was working off of a list she had made from consulting Consumer Reports. She knew her criteria and she had already mapped out which models qualified and which did not.

Result: My mother left Big Lots with no coffee maker. Yesterday she drove out to the Galleria Mall and looked around Sears there and she still has no new coffee maker. She is using one of my castoffs. It was missing the carafe lid but she has wedged in a lid off her old one, which more or less fits.

But I left Big Lots with a new toaster! It is this beautiful black Rival toaster. It was $12.

It goes beautifully with the new Bosch stove.
Posted by Mary Kunz Goldman on April 23, 2010

Mary, looks like this site has them for sale.

I have been just like your mother for months...I have been trying to decide which one to buy. I did some research because I love a HOT HOT cup of joe and none of the ones I've had were ever hot enough for me. My good friend has a Kuerig and I am there a lot...not an awful cup of coffee...just not hot enough. I went on line and searched and found a brand that brews at like 225 degrees instead of the standard 180-190 degrees. But its like $260.00. I am going to check the site that Sally has suggested. I like the idea of the single cone because then I can use boiling water and by the time it goes through it should be hot enough for me.

I have a dual-cup Cuisineart 'Two To Go' that came with 2 stainless insulated tall mugs which uses the cone filter. It was a prize I won.

I always use it with my old mug though and just put in one Tbsp. of coffee and it works perfect. It is very small and fast. The lid opens from the front top to add water and coffee/cone.

Amazon.com is the only way I fly. Give it a try!