Busti and the Bosphorous 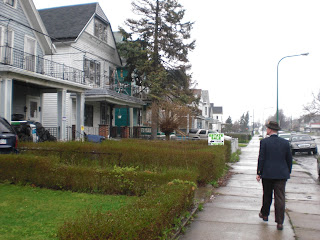 Today at Mass my friend Bing joined me in my pew because his pew was taken. Which, you cannot do that to me, or else I will force you to go estate sale-ing with me after Mass. That is what I did to Bing.

I suggested we hit an estate sale on a street which in Buffalo has a very famous name. It is Busti Avenue! There was supposed to be decades' worth of stuff.

Bing advised against our going to this sale because he had Google Mapped it and the block looked terrible. He said there was a closer estate sale, he had seen signs on the way to church. I agreed to that compromise and said I would follow him. Which I did.

But the signs led us to the estate sale I had wanted to go to, on Busti. Ha, ha! Above is a picture I took of Bing walking to the sale. We had just parked our cars and crossed our fingers that they would be there when we got out. I put my Roman Missal front and center on the seat to deter would-be crooks.

Bing is so cool. Someone at the estate sale commented on his hat and he said, "We just came from Mass."

The house had a world-class collection of Harlequin Romances. 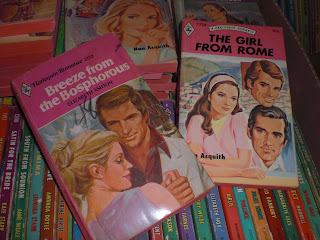 Those were the two I liked best because of Rome and the Bosphorous.

The house was interesting with this entrance way on the second floor. I got a fellow shopper to pose in this picture so you could see the arch to scale. 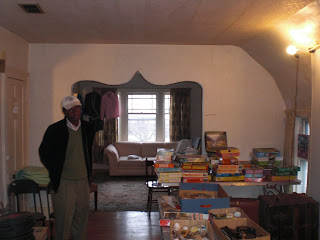 There were no Leonard Pennario records though I did get a record of Mario Lanza singing songs from "The Student Prince." And Harry Belafonte, "Calypso."

On the first floor was all kinds of Catholic stuff and also all kinds of cool clothes though there was no telling if it would fit me so I did not get the clothes. One coat was red with black trim and on the hanger with it was this picture, showing a woman -- apparently the, ahem, deceased -- wearing it. 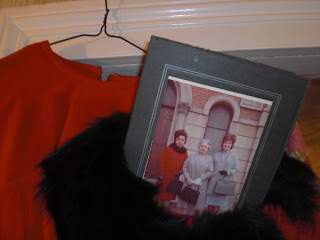 Bing saw the picture first and he called me over.

And hers too, apparently.

That made us nostalgic and afterwards when we went to our cars, me carrying the St. Anthony parishioner's vintage tablecloths, we got into a conversation about it. Alas, our conversation was interrupted by a thundering boom car. Boom car does not even describe it. Gang car would be more like it.

Zut alors, we were afraid we would get shot!

Well, at least that knocked the nostalgia out of us.

I went to that sale too! It was very nice. Did you happen to see the Canisius High School catalogs from 1956? $200 for tuition! Zut Alors! My parents paid that for a week for me at CHS.

I was disappointed at the fact that the basement was not available. Rick said it was "too filled." That's my kind of basement!

Rick was also getting a little irritating, he kept barking at his employees to open the display cases for me and other shoppers if we got within 5 feet of them. I'll speak up if I need anything chief, otherwise it's just embarrassing for the employee and the customers.

You're fun to estate shop with!

Edmund.. I agree.. I was never a huge fan of Rick's personality. I wanted to see the basement too!

I love the business about the basement being "too filled"!!