There is a lot of talk about the case of the St. Gerard's statue. They have begun moving my old church to Georgia and the first thing they did was ship a big statue of St. Gerard. And when the statue got to Georgia they found that the head had broken off from the body.

Now we are getting all this superstition about oh, this means we should not move the church, that St. Gerard does not want to go to Georgia.

Son of a sea cook! It always amazes me how people who cannot handle normal faith can embrace all kinds of crazy superstitions. People who could never get up to go to church or synagogue have no problem believing in stuff like reincarnation or astrology or a damaged statue being a sign.

I will tell you what St. Gerard is trying to tell us.

He is saying that we should be more careful shipping things!

I think the situation with my prayer being answered so fast and in such an uncanny way trumps any accident that may have happened with a statue in transit, I will say that. If the statue had arrived in one piece, now, that would have been a miracle.

Anyway it is a little late for everyone to be becoming concerned about what St. Gerard wants, you know? Why didn't people worry about that a few years ago? Here is what I do not want: St. Gerard's to turn into another Transfiguration Church ... 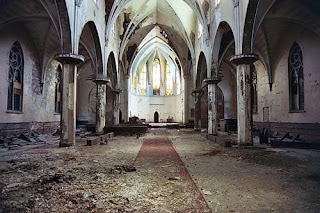 ... rotting on that corner. I do not want it to become a community center or a mosque. The only way I would want it to stay is if our wimpy diocese would step up to the plate and maintain Gerard's and reinstate it as a Catholic church for a neighborhood that desperately needs it. Oh, and I would like a Latin Mass in it too.

But even if the diocese said it would do that I would not trust it. So there, move it to Georgia. Just because the statue lost its head does not mean we should lose ours.

Now, not to change the subject, but I have good news. Remember Dyngus Day? I am finally getting my voice back.

I had forgotten what that was like when I was a kid going to bars. You would wake up the next morning with hand stamps on your hand plus you would have lost your voice! That is what happened to me on Tuesday. I awoke with my hand covered in hand stamps. The most prominent read "St. Stan's." And when I opened my mouth all that came out was a squeak!

Roll out the cough drops! All that yelling over loud polka bands had taken its toll!

Wisely and prudently I did nothing all day but work on my Leonard Pennario book which, most of my work these days involves lots of editing. I did not have to talk. Now the hand stamps are still there but I can talk again.

Re superstitions, here's a quote appearing at the beginning of the novel Foucault's Pendulum:

Do you mean to tell me that some people talk without typing? Guess I have been a hermit too long, lol!