Evening at the Polish Cadets 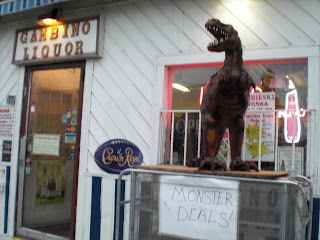 Tonight we dined at the Polish Cadets. It is a private club which means Howard can smoke his cigars there if he so chooses. Zut alors, he had not brought a cigar! He will bring one next time we go. Click on that link and you will read the history of the Polish Cadets. It is long and storied! My favorite line is the one that says: " The services of W. Zawadzki, architect, were retained in 1913."

W. Zawadzki is a name I love!

The one problem with the Polish Cadets was, they were out of wine. That was because the crowds came in on Dyngus Day and cleaned them out.

So our friend Airborne Eddy and I had to run across the street to Gambino Liquor. I admired their Tyrannosaurus Rex so I took that picture above. Observe the Sobieski Vodka sign behind the Rex! Ah, spring.

I had a wonderful time at the Polish Cadets where we ate fish fries and Airborne Eddy asked me many, many questions about Leonard Pennario. Here is a blurry picture of Howard dwarfed by a gigantic Polish eagle. It is blurry because I was into the wine from Gambino Liquor. 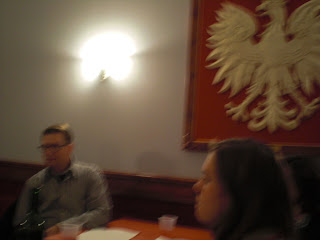 This was only the end to a very photogenic day. When I went in to the office this morning the window washers were there! That is a magical thing. It happens only something like once a year.


Here is one shot I snapped of the window washers. 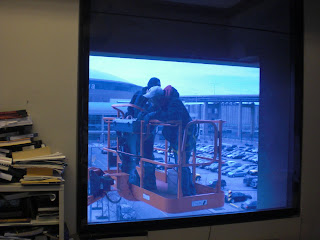 Here is a shot as they descended. 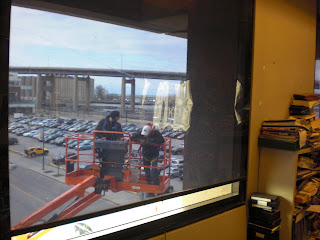 It is funny to think that was this morning. The day seems so long! But it goes by so fast.

The best thing you can do is take pictures as you go through it.
Posted by Mary Kunz Goldman on April 09, 2010

HI Mary, Glad you came in with Eddie last Friday night to Cadets...we will be restocked with wine very soon so please stop in any time and say hi...Take care, Wendy Higgins :)