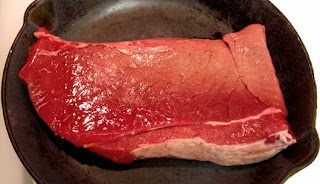 My saga with steak continues. Remember how I have been trying to cook steak the way they do at E.B. Green's, or the Chophouse? Tonight I cooked beef top round.

The beef top round was on sale at Jubilee. It was buy one, get one free. It worked out to $2.50 a pound. That is not bad for top round which is one of my favorite cuts.

There is this recipe in the Joy of Cooking and that is what I used. You were supposed to season the beef with salt and pepper and then char it in a hot skillet for six minutes a side.

What an adventure that was. I almost died from smoke inhalation!

I should have stuck with the Crock Pot the way I did with Leonard Pennario.

So I was choking and coughing from the smoke but the good news is, the steak came out well.

"This isn't too bad," Howard said.

He said it might be my best attempt so far!

It was pink in the middle the way it was supposed to be and it looked pretty when you arranged the slices in a fan-type pattern on the plate. Then I adorned it with mushroom fricassee out of this cookbook I just got today at an estate sale. And my favorite vegetable, Swiss chard. I did up the Swiss chard with onions and garlic and raisins.

Howard says now all I have to do is apply what I have learned to an expensive cut of beef. Because I am wiser now I will not blow it.

Here is where he and I part ways. I get my fun out of cooking up a $2.50 a pound cut and making it great. That is my ambition, to be able to take top round from Jubilee and make it taste like the Hyatt.

If you are paying top dollar, where is the game?

Where is the satisfaction?
Posted by Mary Kunz Goldman on April 10, 2010

You remind me of my dad. He was a cook in the Army during the war and was an amazing cook who taught me a few things too. When he cooked a steak, he would preheat the iron skillet to between High and Med - very hot, then throw the steak in there and cover it with a sauce pan lid while it cooked. The house filled with smoke. He taught me to only turn mean one time.

BTW, I baked an awesome cheesecake yesterday! My first one.

You need the marbling for it to taste like the Chop House...and lots of butter! Unfortunately, I have never seen a piece of beef for a couple bucks a pound with the right marbling... Hope you find Eldorado! There is nothing like a great steak!