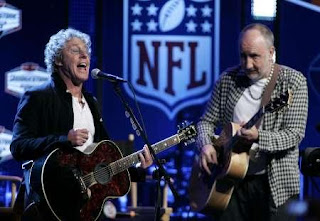 Did anyone else see the Who, performing last night for the Super Bowl? I did not watch the Super Bowl, I have to be honest. You know me, I was listening to Leonard Pennario instead.

But the Who, we just watched their Super Bowl performance on YouTube.

Ha, ha! It is like that spoof on Kiss I ran across somewhere. "I used to rock and roll all night, and party every day!" Just that one word makes all the difference. "I used to" instead of "I'm gonna."

There is a rumor flying around the Internet that Keith Richards has given up booze.

You know what, I feel affectionate toward and sorry for these rock goofs. When they invented themselves years ago ... 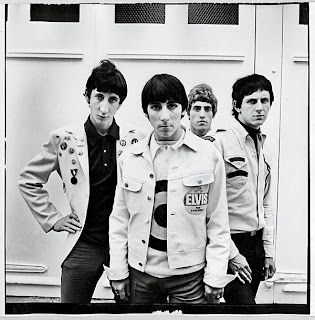 ... they did not allow for the possibility that they would ever get old.

What is scary though, as Howard says, is that he can remember when the Who was young. I personally cannot remember that. You know me, I was listening to Schubert.

But I can relate when it comes to actors and actresses. Here is what is scary to me. I remember when I was a kid, and my parents would get all misty seeing actors they remembered from their youth. Wendy Hiller or Greer Garson or Cyd Charisse or someone would come out of hiding and play someone's grandmother or something. And my parents would go on the alert, rejoicing and discussing. My dad would be cooing. He and Pennario were in love with exactly the same actresses, I have often thought about that. Well, they were born the same year.

Now Howard and I are thinking, we will be like that one day. And that day is coming! Clint Eastwood is already 80 and he was this he-man when we were growing up. It is terrible to imagine Clint Eastwood being 80. It is contrary to nature.

One day they will trot out Gwyneth Paltrow or Demi Moore to play someone's grandmother. And we will say: "Oh, look at Demi Moore. She is holding up well."

Hmmmm. I wonder if she will hold up well.

She's got to do better than Roger Daltry.
Posted by Mary Kunz Goldman on February 08, 2010

The Super Bowl? I would rather watch cartoons, lol.

I have never been a rock star but I have lived through 60+ years and wish I had prepared a bit better for this age. The hippy days did my brain cell no good at all!

And you were listening to Schubert? When I think that he and Mozart and Beethoven were dead before they were 60 it makes me wonder what those grey rockers have accomplished with their lives...or for that matter, what I've accomplished at 59. Not very #*$%% much!

Where is my Mary!? Hope she is OK.

Of course she'll do better than Daltrey. She's got a lot more plastic.

Keith Richards had a cameo in the last pirate movie as Jack Sparrow's dad...supposedly he's been clean and sober for a while now.

I never much cared for the players of rock and roll, I was too busy dancing. Couldn't tell you who did what for the most part. But I do agree that I would like to see younger performers. If I were to watch the SB of course. I was more fascinated by the blov by blov description of the Buffalo Bloviator.

It was lip-synched and pre-recorded. So easy to tell....

Actually, it wasn't. The "delay" that you perceived as "lip-synch" is due to the cameras being a great distance away, while the audio feed is "on-time". They have to electronically delay the audio, and getting the match correct takes a little time.

Was it their best performance ever? No. Was it an amazing spectacle - which is the point of a Super Bowl halftime show? Yes.