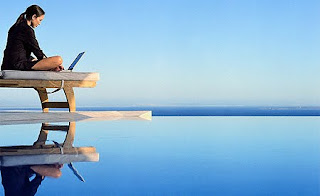 I just realized that Eduard Kunz de-friended me on Facebook. He was the pianist who was a contestant in the last Van Cliburn Competition. Eduard Kunz is from Siberia. I friended him because of his name and explained I was the music critic in Buffalo and I sent him a few jokey messages of encouragement. That was it! I was never a pain! But he de-friended me.

Why would a pianist who is 28 and want a career de-friend a music journalist who is nice to him? It is not as if I hold the keys to anyone's career in my hot little hands but still. You would think, all other things being equal, keep me on the rolls, you know?

I hope when I wrote about him I was not obnoxious! I did not think I was.

Here is a picture of Eduard Kunz reflecting on my Facebook friendship and is deciding it is not worth it. 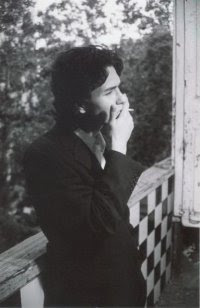 Generally if you are "de-friended" you can understand why. For instance I was dropped by that British editor named Toby Harnden I wrote about that one time. I bet I know why that happened. I was new on Twitter and I looked for him and followed him. Then he was the kind of Twitter person who twittered constantly, from whatever press conference he was at. I found them interesting but I was thinking I should use Twitter just for music purposes and they were gumming things up.

So while I was trying to figure this out I "un-followed" him and "followed" him several times, twice or three times. As I said I was new on Twitter and now I see what was happening was, he was getting emails whenever I dumped him and put him back. Ha, ha! Zut alors! So, OK, I can see why Toby Harnden "de-friended" me. That is one of those situations where you want to apologize and explain but anything you say will make it worse so I just left it.

But Eduard Kunz? I do not understand that.

Here in Buffalo everyone friends everyone. It is perfectly normal to get a friendship request to someone you do not know and have never heard of. But you always hit "confirm." It is just what is done here.

You never ask anyone: "Excuse me, where do I know you from?"

Oh, well, it is of no moment. It is time for today's topic. Today's topic is not Eduard Kunz.

It is dumb ads featuring laptops!

That is a goodie at the top of the page. Who in the world has ever used a laptop like that! At the end of a dock. That is tremendous.

Here is another annoying laptop picture. 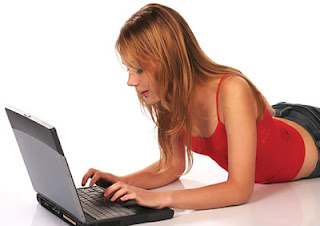 I tried using my laptop like that in California for the first few days when I was there with Leonard Pennario and I am telling you this, you quickly get sick of using a laptop like that. 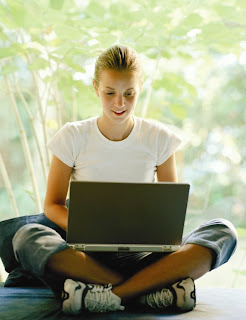 You do not use laptops the way these people are using them. You do not. Maybe Eduard Kunz does! But normal people do not.

Now, this I could see. 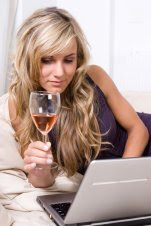 I love how this picture was identified on the Internet: WomanWineLaptop. Hahahahahaa!!

That should be the name of my Web log.
Posted by Mary Kunz Goldman on January 14, 2010

Wine, Larry, Laptop... I tried that back in my drinking days. I had a big problem though. The wine was Mogen David (MD 20/20), fortified to the moon! The problem was that it was not giving me 20/20 vision as expected. Even by the end of the second bottle. And I could not see the computer. In fact, I had to close one eye to keep from seeing three of everything! Seeing double is bad enough but three? Gimme a break. When I drove home, I just assumed the 'center' image was the real one and hoped for the best. But the point is, the wine did not work too well for me. Later, I tried some Old Bourbon Hollow, 100 proof TN sour mash to see if that could help the problem of 'drinking while breathing'. But, I cannot remember what happened.

Oops! I meant to say that your tale of Mr. Kunz reminded me of a cool Chinese pianist that played long ago. I especially liked his versions of some Mozart and, post some of it on my YT channel. His name is Fou Ts'ong.

BTW, maybe Mr. Kunz has a jealous lady that made him do it?

Larry, you have the best stories. I want some Old Bourbon Hollow!

Dear Mary i defriended you because of posting pictures from my page which supposed to be for a friends only. i found it wrong. that is why. it's a pity you did not get it. and also it is strange you make everything public.