A toast to greatness 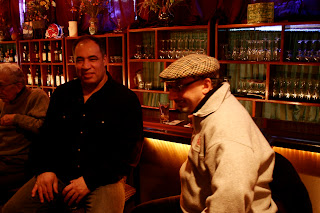 Last night we went to our favorite new jazz club, Bobby McGee's. Above is a picture of our friends Lou and Gary at McGee's.

Here is a picture of the action. 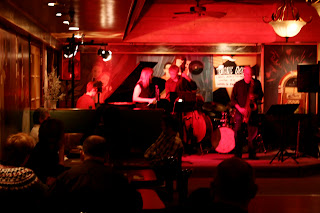 I am at Howard's computer and not mine because I cannot get mine to turn on. Were I on my own computer, you know me, I would be running a picture of Leonard Pennario.

Because listen what happened. Yesterday after a long day at work I was in the coat room struggling on with my coat when my cell phone rang. And I answered it. And it was the grandson of a former head of Columbia Artists Management! He is this wonderful gentleman from California who heads up an aerospace company.

Anyway, I loved talking to this caller yesterday, even though I was brain-dead, sitting there on this coat room couch with one boot on and one boot off. He told me at one point that his sister was Pennario's goddaughter. I was trying to say something about how Pennario had several godchildren in Buffalo but this is the funny thing, I actually could not articulate the sentence. That was how zoned I was!

The Columbia Artists Management head's grandson then explained gently: "It's a Catholic thing."

Hahaha! Just the idea of someone thinking he had to explain that to me. That cracked me up. Well, here I am with the name Goldman.

This morning I was trying to get in order a few things I would like to discuss with this gentleman the next time we talk. So I got on this Columbia Artists Management page. They have this neat graphic and it was fun to watch it. They have this long parade of historic Columbia artists coming at you. People I love. Like Richard Tauber. Gregor Piatigorsky. Jascha Heifetz of course. Pablo Casals. They list Casals as a violincellist. That is a term we should start using!

But of course at the same time I am enjoying this graphic I begin getting grouchy because I do not see Pennario and what the heck, you know? I start resenting all the pianists I see. Rudolf Firkusny. "Who cares about him?" That is what I said out loud over my coffee.  Jorge Bolet. "Jorge Bolet? Big, big deal." Jose Iturbi. "Who remembers him?" I know, I was being mean and dismissive, but this is the way I get when I am provoked. Pennario was better than these pianists, I am sorry!

Then I saw his picture!! I could not believe it!

He is right at the end and after the Trapp Family Singers but still.

Kudos to CAMI, for paying tribute to Leonard Pennario!
Posted by Mary Kunz Goldman on January 13, 2010

Sounds like you have a bad power supply. You can get one at office max for about 35 dollars, I am sure Howie can replace it, he sounds like a knowledgeable kind of guy.

Yeah, I think Howie could handle that, LOL!

I will be vanishing again in a day or two. Heading to my Appalachian home in KY for a few days. Hold down the fort! :)

I see you prefer players of the pianoforte.

Joe, we got the computer going again.. I think what happened was some big update installed itself and the computer could not restart, something like that. I and my computer thank you for your concern!

Larry, we will miss you when you go to your old Kentucky home! (Your response: Weep no more, my lady.)