My Dinner With Arnold 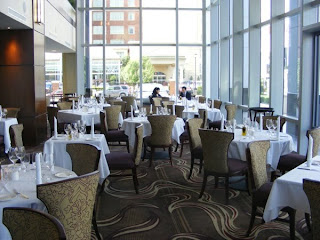 So much has been going on what with my Crock Pot and everything that I forgot to talk about dinner on Sunday night at Avant! What a wild dinner that was! See that picture up above? That is the restaurant in Avant where this dinner took place. We were sitting at that exact table where the people in the picture were sitting.

The dinner was so we could meet a friend of our dear friend Judi's named Arnold. He is from Toronto except he moved here. That is a long story and it involves Montreal and New York City and Vancouver and many other of the world's great cities, I forget which ones.

What I do remember is, right away Arnold and I got into a fight. It was about Mozart. Arnold said he thought Mozart died too late rather than too soon. That was within the first minute! I put a smile on my face and thought: Glass of Red Wine, Coming Right Up.

Next, the whole table got into a big argument about the Statler ... 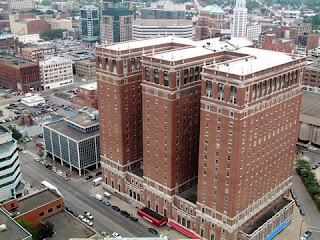 ... which, note to out-of-town Leonard Pennario fans, is a hot-button issue in Buffalo right now. It is this historic hotel that was auctioned off to a buyer who, it turned out, could not pay for it. Now it is in limbo and we are afraid it could be knocked down.

Arnold thought the Statler should go. Howard and I responded with, what in the world, you come in from Toronto and you tell us we should knock down our historic hotel! You are telling us our historic hotel is crap? Well, OK, we were a little more polite than that. But not much.

The ice was officially broken when I ended up apologizing for the Holocaust. Every once in a while at highly dramatic moments I wind up doing that. Because my family is German and even though we have been in Buffalo since 1860, I feel bad about everything, so I say something about it.

And another thing! I was put in the position of defending the Catholic Church. You know those social bans on talking about religion, politics, etc.? We violated all of them, boom, boom, boom.

That is a dinner to remember!

Back to my apologizing for the Holocaust. What strikes me as odd, now that I think about it, is that my apology is always accepted.

You would think someone would say: "Get out, Mary, number one you were not born yet and number two your family was in Buffalo."

But no one has ever said that!

Everyone accepts my apology. Which, I meant it to be accepted, so maybe I should not be surprised. But I am.

One thing nice about Arnold: He was familiar with Leonard Pennario.

A most excellent thing in a person.
Posted by Howard Goldman on January 12, 2010

A young African American woman once turned some "white master" rhetoric on me. I said "Now look. No ancestor of mine was in America before the Civil War. If anything, they were probably putting the boots to Jews in Germany!"

She looked stunned for a beat, then she started to laugh and said "You funny, you know that?"

Prof. G, only you. I am laughing and laughing!

At me or at what I said?

Mary, regarding the Statler as I like to put it to those who want/wouldn't mind it demolished: "Would you like to be put down before your time, if you had a few problems too?"

The Catholic Church doesn't need to apologize either. Actually everyone should apologize to the Church which has been so often falsely accused even though it - especially its head, Venerable Pope Pius XII - did so much to help the victims.

If anyone wants to negate that, just read Sr. Margherita Marchione and all the other research done to prove the Pope and the Church's true role ad nauseam.

See you at Mass, Sunday!