Dead on my mat 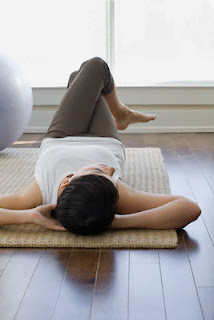 After all my eating today I went to the gym and attended Killer Abs class.

I have a strategy for getting myself through classes like this. What you do is, you take your mat and put it right next to the teacher's. As if you are a teacher yourself! Then you do the exercises and smile as you do them and because you are in the front of the room, if you collapse on your mat everyone will notice.

My strategy worked well! Here everyone else in the class is grunting and groaning like the poor souls in Purgatory and there I am squatting and squeezing to beat the band.

Until the end of the class when I found I could not get up. All those squats and squeezes had gotten to me!

I mean, that is me in the picture above!

Finally I did and I staggered into the other room using this doorway no one else uses. It leads to the big room with all the treadmills and elliptical machines and whatever. There was a Schwinn exercise bike close to the door and no one was on it so I got on it and sank down.

I could not even pedal! I just wanted to rest. I sort of pedaled slowly this way and that so it would look as if I were doing something. 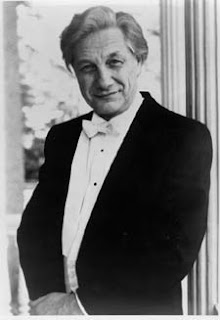 When my heart slowed down I went home. That was when I got to call Russell Stanger. That is he pictured at left! He is this eminent conductor and he called me this morning so we could talk about Leonard Pennario. Remember those letters I sent out last summer? One of them was to him. But he had moved so he only just now got it.

He called me this morning and I was so happy to hear from him. He wanted to know first thing if I was done with the book. He was hoping he would not be too late to contribute.

As if I would be done with this book!

That is a good one!

Luckily I stifled my laughter successfully. I told the maestro, I would have found him one way or another. I have found all kinds of people, even a few Pennario told me I would never find.

I do love asking people about Leonard Pennario. I am going to talk with Maestro Stanger again but we had a nice conversation in the meantime. By the way I called him Maestro. I did not embark upon this project so I could not call people Maestro.

Maestro Stanger told me about a time that no place was open after Leonard's concert so they went to an ice cream parlor. And I am thinking, that is so Leonard! Leonard loved his ice cream so much. And he made sure I loved it too. All of a sudden hot fudge and caramel were part of my basic food groups.

I am probably still working that off!

I thought of Pennario while I was sweating it out in Killer Abs.
Posted by Mary Kunz Goldman on January 21, 2010

About the picture of you on the mat... I think I might even could handle that kind of exercise after a big eating. Could I bring my pilly too?

Larry, sometimes I just lie there like a dead person.