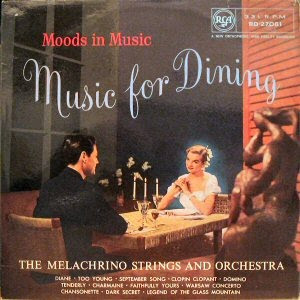 Howard, what a Web logger! I should think twice before letting him sit in. I should be like a jealous jazz pianist who has a gig that I love and I will guard it and not let anyone sit in. Howard always calls that situation guarding your bowl. That is an expression I love! You just picture this big dog.

Yesterday Howard did forget to mention one thing and that is that during dinner we listened to the Melachrino Strings playing "Music For Dining."

We actually did that!

I do not think anyone has done that for decades.

Wow, I just went looking for a picture of "Music For Dining" and up came my own Web log! It turns out I have written about this album before. I bought it at the same estate sale where I bought the autographed picture of John Gilbert.

What a nice thing that I wrote that down! Because you forget. And it is nice to know where this record came from. I bought a few other albums along with it, including "A Christmas Carol" with Lionel Barrymore and Artie Shaw's "Moonglow." Also that day I bought the silk dress I wound up wearing to the Buffalo Philharmonic Orchestra gala. Well, that was at a garage sale. Stop me, someone. I am digressing!

As it turns out, "Music for Dining" is golden. It is just perfect for dinner. It has this kind of sweep to it and this rich, robust volume. We were playing it on the 1950s Sputnik record player off in the sun room but it sounded as if we had speakers in the dining room. This warm tone. You do not get that from CDs.

It provides this kind of cushion-y backdrop but as Howard says, it is as if they engineered it perfectly so it does not interfere with conversation. The music is always above or below the human voice, perhaps that is it. We are wondering. We just know there was something special about this album that made it perfect for dining.

In contrast to what we played next, which was Leonard Pennario's "Rhapsody Under the Stars." I remember where I found that! It was in the box of records that came with the stereo that mysterious night when I drove out to Tonawanda and bought it. I thought "Rhapsody" would be OK for dinner. It was light music, right? But as soon as we switched the record, it was not the same. Right away my friend Michelle got distracted. "What is this?" she asked. There was something in "Rhapsody Under the Stars" that hooked her in and that is not what you want for dinner music.

The Melachrino Strings is what you want! Here is a picture of George Melachrino. He seems to have been a British bandleader, or orchestra director, or whatever you would call him. A British edition of "Music For Dining" identifies him as "George Melachrino. The man. The legend." 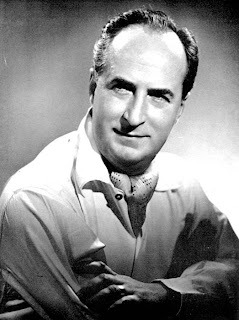 Our "Music For Dining" has an old sticker that says it comes from The Music Box, a record store on Hertel. It says "The Music Box," and an old-fashioned phone number, and "Buffalo 16."

I thought Melachrino was a brand of cigarettes. When Harpo Marx visited Moscow, he couldn't quite get the name of his guide, who called herself Comrade Malekeenoff, so he called her Melachrino, when he wasn't calling her "spy".

Yes, well, be sure and bring that 'Melachrino Strings' when we all get together at my Appalachian home in the KY mountains. I am sure it will go over real big as we sit on the porch drinking moonshine and plinking possums with the old double-barrel. That is assuming they have electricity for the record player there by then.

Larry, that moonshine sounds great!! I will also bring the Melachrino Strings' "Music For Possum Plinking."

Prof. G, I rejoice that there is a Marx Brothers story for every occasion!