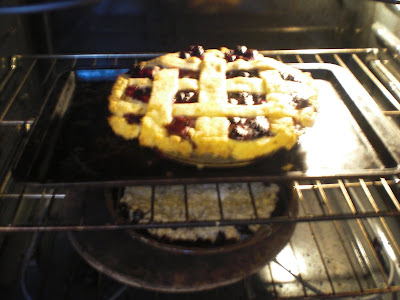 Thanksgiving is over and for me the day began at 4:30 a.m. I was restless and I could not sleep! I was in the middle of this terribly busy week at work, which is due to continue shortly, may I add. And I had this huge Thanksgiving dinner to do.

Anyway I got up at 4:30 and then I went downstairs to the kitchen and began making Concord Grape Pie. It is so funny, that time of day! No boom cars which is rare in our neighborhood. Well, there were one or two. And me just standing there peeling my grapes. These are Concord grapes. Note to out-of-towners: Buffalo is in, ahem, wine country. And these Concord grapes are an ancient variety with seeds and dark blue skins. To make Concord grape pie you have to peel them one by one. Which is not that difficult. You just hold them over a bowl, squeeze, put insides in one bowl, skins in the other.

It was ridiculous to make the grape pie because it was so labor intensive and I had so much else to do. And I did not have to make the grape pie. But that was what made it fun. It is like a skater doing a Double Axle. You not only do Thanksgiving dinner but you throw in this rare and labor-intensive Concord Grape Pie.

I do not make pies that often and whenever I do, I am amazed at how happy it makes me. Making the crust is a challenge and I have to cheat and patch things, and when it comes to the top crust I do a lattice. That way you do not have to get a neat circle. All you need are a few strips.

So the world is quiet and there I am in my pajamas, doing this lattice crust.

I would step back from time to time and evaluate it, then adjust it, fuss with it. I patched up the perimeter. It is lucky that Martha Stewart has come along and made it chic for things to look homemade. Because this pie sure looked homemade, I will tell you that right now.

Finally it was time for the artist to lift her brush. And into the oven it went. Oh, here was another thing: I had misjudged the grape amount so I had enough for two pies. I could not see making another crust so I topped the second with a streusel topping.

Above is a picture of my handiwork in the oven!

Here is a closeup of my streusel grape pie which Howard took with him when he went down to work at Big Blue. 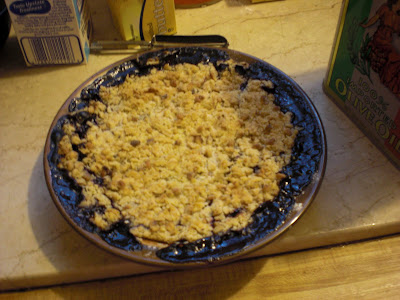 The pies woke me up and it was as if I had gotten a full night's sleep. I was all happy and awake. I put on my I-Pod Shuffle and listened to Leonard Pennario. Then I listened to this Catholic Answers podcast I get. They had a guy on there in Donegal, Ireland, who used to be addicted to pornography and had kicked the habit and was taking questions. These podcasts, you would not believe them.

One caller began his call with the usual, "How are you doing?"

Ha, ha! I laughed out loud at that.

While I was listening to Catholic Answers I stood there in my pajamas and chopped all the Brussels sprouts off the stalk... 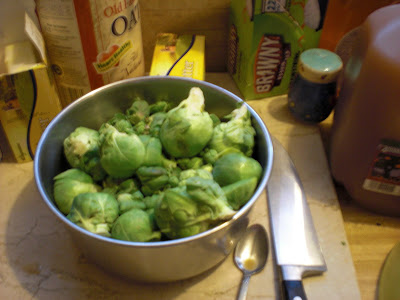 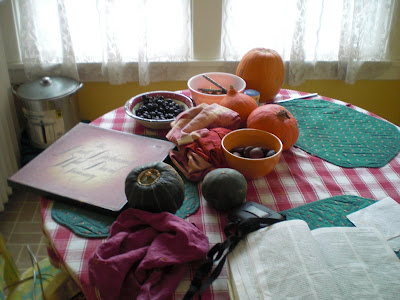 Not only do you make your labor-intensive pie and pull off your dinner but you make it to Mass!

St. Anthony's is by Niagara Square and when I got downtown you could see the runners from the Turkey Trot all circling the square. That was exciting! It is fun to see this ancient race playing itself out. Note to out-of-towners: Our Turkey Trot is the second oldest race in the country. Only the Boston Marathon is older.

So there I am at Mass and I am all happy and excited and Thanksgiving-ish. And after Mass we sang the Te Deum!

That is that ancient prayer that begins "Te deum laudamus..." Our priest, who has the glorious name of Father Secondo Casarotto, said it goes back to the third century A.D. The used to sing it at military victories in the Middle Ages. It is a song of praise and thanks and a lot of it comes from ancient Hebrew psalms. Yesterday at church they handed out sheets of paper with the old medieval score. The ancient kind of score, with square notes and four staves. And we sang our Te Deum.

It was great to hear Father Secondo leading us in the chant because he had surgery about six weeks ago and was kind of weak and we were worried about him. Now he was back and strong and on his feet and singing the Te Deum. That was something to be thankful for and it added an extra dimension to the chant.

Not to be corny but we all have so much to be thankful for! So it is great to know the Te Deum is out there for when you need it.

Here is a video of it I found with translations and everything. It is timeless and beautiful and haunting.

What a situation! I have filled up all this space and I am out of town and in the chronicle of my Thanksgiving Day it is not even noon! Well, all in all, the day went well. However I had a lot of help from my brothers and sisters. I needed it because a few things fell in on me because of my grape pie and my Te Deum. Those things come at a price!

Also I have to be honest.

Job well done! The pies look amazing!!
I wanted to go to Mass at St. Anthony's too... but I was out too late the night before. As the saying goes, "The spirit is willing, but the flesh is weak." So true.

That was a magnificent post! I have no family, saw or spoke to no one and had peanut butter for dinner as usual but I now feel some of the Thanksgiving joy that 'normal' people must feel. Thank you for brightening my day!

"I am dead today"

Ah ha! That must mean that you are a Thanksgiving haint!!! I knew it!

Larry, you are so sweet!!! This is an old post but I do not think I saw your comment before. I wish I had seen it earlier... I can't believe that was over 2 years ago!